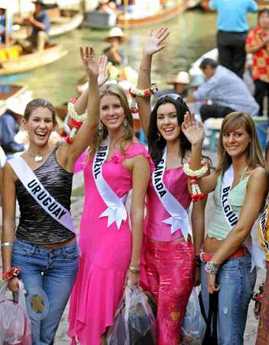 via the instant message deal and she said too bad im not a miss universe contestant and i was all yep maybe next year.

its warm today. super warm. eight minutes until my shit is downloaded and i can walk around hollywood. im thinking about going to visit the cuban girl who i havent seen in a long time and who really should have my resume because i love her company so much so that i would even work for free right now i dont even care im sitting here doing nothing all day except writing to people who dont write back and writing to places whose servers bounce the shit right back, etc.

i did apply for one job and the gentleman replied nearly immediately and said that he had actually thought of me for the opening but that really it wasnt the right fit, just yet. and that was nice of him to write me back twice.

i was on the interweb this morning with a nice girl from south america who swore that she had written me not once but twice and i didnt write her back. and i was all im so sorry. you should see this girl america. but the truth is i do get a lot of email and almost all of it is overwhelmingly nice and i am so appreciative you wouldnt know, and you also wouldnt know since i am really bad at returning email, and phone calls, and cards, and letters, and pretty much everything, the babe who is producer at e! said that im just as bad as the talent. of which i will neither confirm nor deny.

she said she lost her crush on me when i didnt return her emails but now its back since i linked her last week.

then she said she had to log off cuz her mom needed to use the phone.

ok my shit is downloaded but i wanted to say yes i did see the britney and kevin special, like omg y’all.

and i will have to say that upon first viewing i was repulsed, obviously, as im sure we all were.

but i have to say that i applaud her for, i must admit, is maddonasque fuckit-im-bigger-than-anyone-im-going-for-it staring right into the lens of the camera and saying you’ll blink before i do.

how can you not love her big black security guy saying he didnt like kevin at first (and then not saying that he likes him now)?

how can you not love her shameless documentation of plucking the hillbilly dancer from a club in hollywood, flying him to england and using him like the boytoy he is? and then cutely glowing after humping him three times before noon?

bravo britney, you might be the goofy little ho we had always hoped youd be, and i for one wont judge you for fulfilling that fantasy and bringing value back to the word transparancy.

my question is, how did upn get this and not one of the majors or mtv? did upn say, here britney, you can have All the money. thats got to be it, right?