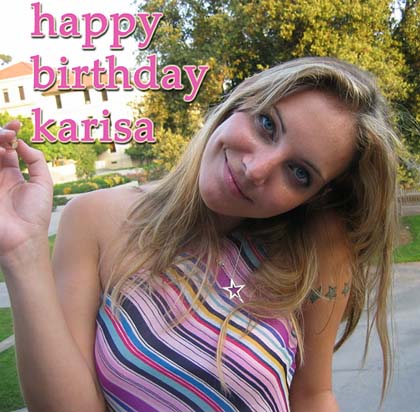 is the fact that today is our pal karisas birthday.

karisa who is one of my best friends ever.

in a perfect world she and i would live in a town where they made television programs, for if we did, i would produce a show called the karisa j show where in each episode we’d make karisa cook something, fix something, build something, and interview some one.

if the style network had any viewers it would be perfect there, but now im thinking mtv.

only problem is karisa isnt interested in being a star. publicly, that is.

tonight i would have loved to take her out for a delicious steak dinner at her favorite place, arnie mortons in beverly hills, but considering the circumstances it wouldnt be prudent. therefore i think i will walk over to the armenian butcher shop and see what theyve got fresh-like and grill up a few steaks.

the karisa show would also have to have a Book Minute because karisa loves books. i keep telling her that the karisa book club would dominate all over the oprah book club because who the hell ever wanted to read what oprah was reading?

on a personal note, thank you for everyone who has written and called and commented, your nice words have made all of this much more tolerable and the epiotome of bittersweet.

me and karisa at the xbi christmas party

a trip to isla vista

a trip to the sunset junction 2004

we often do laundry