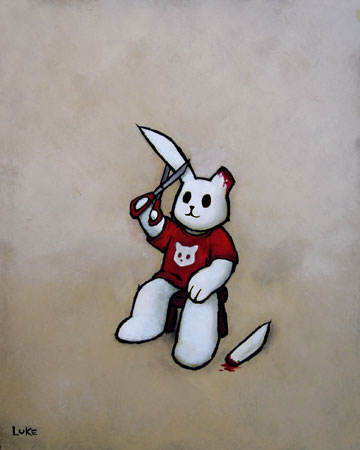 came over to my house last night.

the one with the smile all over it when she left.

she held my hand and esped me through her pulse. it was like morse code in braile.

she pulled my shirt off over my head and led me into the smoking room and asked me to stand on my head for her and i said fine like the zombie i was.

why does the caged bird sing

what is the sound of one hand clapping

how many girls have you been with

why do some smart people vote for bush

she said but you gave up on idealism years ago.

it wasnt yet nightfall but the colors in the sky were all the good oranges and yellows and reds that youd ever wish for in a sunset which was ironic since we were now floating high above sunset blvd although i was still upside down and trying to keep my balance.

she said give to caesar whats caesars

and into the light.

and she kneed me in the nuts and i woke up startled with the phone ringing.

it was a different runway model telling me what a wonderful time she had with me last night and that i shouldnt worry, that everything was going to be fine, and to remember that she wants me. badly.

me, the one who never dreams. who, when caught dreaming damns the wicked spirits for taking advantage of a resting soul during its most vulnerable fooling the mind with lies and ridiculous fantasies.

and i tried to go back to sleep but the mailman knocked and wouldnt stop knocking.

when i opened the door i understood why, it was a barrell containing what appeared to be all of my blog, the busblog, but everything was printed out and red-penned

i stood there in my pajamas, my robe, and my pipe looking at the mailman like thanks for bumming out my morning, he tipped his pith hat and stuffed my neighbor’s boxes with the typical crap.

there was no way i was gonna get that barrell in my house. if it wasnt for the palm tree by the fence i would have just rolled the barrell off the porch and set it on fire.

on the return address it said

inside the envelope were 111 pages. my age. the pages were stapled. there were no red pen markings on or around any of the words. there was a picture of karisa on the first page.

and on that first page was a post-it that said, make this a book and sell it and your dreams will come true.

and if its fake fake, im going to kill that fucking mailman.