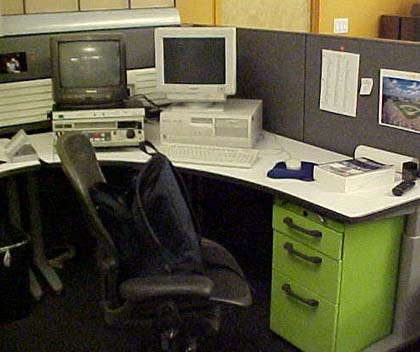 for all of these years, a new dilema arises,

the busblog has been rolling pretty much as long as i worked at E!, so the other day when i was let go, i looked at this blog and thought, maybe the busblog should end now too.

as i have alluded in previous interviews, the busblog started when i was a closed caption editor for the e and style networks.

how it worked was, the shows would get sent to us on tape, one of the two transcribers would watch the tapes and use a court reporting machine to turn the show into a script. the script got sent to one of us closed caption editors who would break up the dialogue into little chunks that would appear on screen at the right time.

believe it or not, this wasnt a very easy job. not only was there a strict way of breaking up the text, but it had to be grammatical, it had to be spelled right, and it couldnt hang on the screen for too long or too short.

at that time we had four other captioners and none of them liked to do Howard’s because theyd get grossed out. me, i have always been a huge fan and one day i came up with this great idea of being The howard stern captioner who would knock out the rerun show before lunch and then do the new episode after lunch.

my boss thought it was a good idea but she never got around to giving it to me, instead she made everyone do everything regardless of what we liked. so i learned a lot about fashion from the style shows that i had to caption and i learned alot about the structure of shows like true hollywood stories whose 2hr shows would take nearly a week to complete.

right before i was going to remind my boss about our little idea about being the Howard captioner, i had a little sit down with my boss’s boss. he said that it was obvious that i wasnt meant to be a closed caption editor. he said that my boss showed him that on every show i would have one or two grammar mistakes and one or two spelling mistakes. i told him that i knew that i wasnt perfect, but that most people watching Wild On Barbados probably didnt care all that much when i would put a semi-colon next to the Wooooo! instead of a double dash.

he told me to watch my back and to get it together or else i would be looking for new work elsewhere. 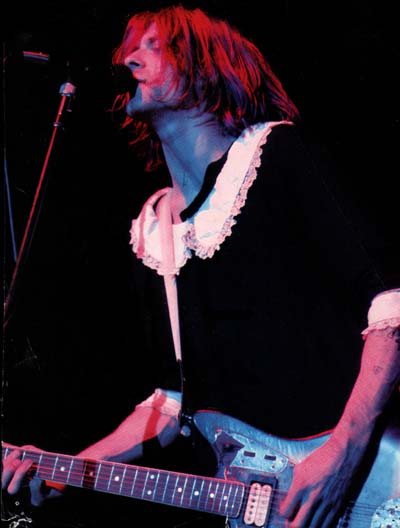 right around this time i started getting carpal tunnel and i realized that it was due to the repetitiveness of pausing the vhs tape, editing the line or two, playing the vhs tape and then pausing it again, and then moving the mouse to the right part of the screen to edit the next line.

so what i did was, about every now and then i would get up, go to the break room, fill up my water bottle, go back to my desk and write a few paragraphs in this new thing called Blogger. sometimes i would write during my lunch break.

i already had a website, but i couldnt update it from work. Blogger was great because i could write whatever i need to say, post it, and be back editing captions in minutes. eventually i started writing little stories about being a superhero which helped me shake off all of the negative feedback that i would receive every time i finished editing a show.

at first just writing something good was enough, but soon i started getting very nice comments from strangers who would tell me that i was a good writer and that theyd be back. time went on and the popularity of the busblog grew. unfortunately my popularity as a closed caption editor was dipping steadily even though we had one guy who was regularily worse than me, and another guy who would disappear for hours and hours at a time.

one day my bosses boss said that there was an opening in the Scheduling department that he wanted me to interview for. he said Scheduling was far more fast-paced and incredibly difficult but i would be in the center of studio production because i would be hiring all of the freelance camera dudes, utility, teleprompter, tape, video controllers, ads, tds, directors, and audio dudes.

it seemed very exciting and a nice change of pace, especially since he was hinting that if i didnt move out of captioning i would probably get canned.

i walked about 1000 feet from my captioning cubicle, interviewed for the gig and a few months later i was transferred to Scheduling and hired to be the Studio Scheduler.

everything seemed amazingly fast paced. phones were ringing nonstop, all of the people in the department were talking to each other in a very quick manner, everyone was serious and Everyone said, youre going to hate it, you will probably quit, and you will most definately get an ulcer.

when i heard that i laughed and this very tall, goth looking dude who i would later find out was actually a very cool dude named Matt looked at me and said, this place will wipe that smile right off your face.

even my new boss told me that what i was in store for was going to be hellish and very few people can keep up with the pace.

two days into the job i was across the street at the la brea tar pits nearly in tears. matt was right, they had wiped the smile off my face.

when i got back to my desk i realized i had died and gone to hell.

and that day i started the first of the kurt cobain stories.

so working at e! has inspired and influenced this blog far more than most people know, and even though i obviously got the hang of working in Scheduling, in a sick bizarre way, the hellishness of my last job, and the dullness of my captioning job completely motivated me to write and escape and funnel all of the pent up engergies and creative juices into a positive thing.

sometimes it wouldnt manifest itself until i got home and wrote, but sometimes it would come out during one of my two government mandated 15 minute breaks, or sometimes it came out during my lunch hour. but i would be a liar if i didnt acknowledge that working where i worked, doing what i had to do, had a lot to do with what youve read on this page over all these years.

and thats why the other day i wanted to end this thing and start something new, called something different. because the busblog started in a moment of boredom, and could have ended because of a day of deceit.

but if i have learned one thing while in television production its the very famous line that youve heard a million times.

the show must go on.

so on we will go.