to perform my civil duty. unlike most people i enjoy jury duty because i find the whole legal process fascinating, especially when its unfolding right in front of you and you get to help decide yay or nay.

but being happily unemployed and enjoying my newfound and delicious freedom to lounge in my pajamas all day and sleep until 2pm, for the first time ever i didnt want to be on a long, involved, indepth murder or bank robbery trial. i wanted to be at the beach.

since everyone knows theres nothing the barely legal pink bikini girls love more than when the unemployed bloggers show up with their cubs beach towel.

so, murphy’s law, guess what they announced at 10am yesterday morning in the overfilled jury pool room?

“your attention please jurors, and now we will be calling the names of those who will be asked to go upstairs to be on a panel for a case that is estimated to last 20 days.”

the entire room groaned. no one wanted to spend a month waking up, fighting traffic, and being part of a big trial that would only get you $15/day and your face firmly etched in the mind of a possible killer. la’s a small town. do you really want to be the last face a felon sees before the judge says the jury has found you guilty?

not in this town where a few years ago a guy turned a newspaper ad of an eddie murphy movie into a fake id and walked out of the downtown jail.

some say the only reason he was caught was because of the xbi but thats another story.

the jury room holds about 300 people. they would pick about 22 people to be part of the “panel”.

the two lawyers in the case look over the 22 prospective jurors and ask them questions to see who they would weed out. each lawyer may dismiss jurors for any reason. usually if youre a prosecuting attorney and a old woman is on trail for killing all of her cats, and theres only two old women on the panel, you probably want to get them out of there.

the panel is also the time when the jurors can say the things that will make the judge want to kick them off. usually i am tempted to say things like “im very likely to find blacks not guilty, so present a hell of a case or you can predict my vote and i have no problem hanging the jury,” but i’m usually kicked off immediately when, in the short questionaire, next to occupation, i write XBI Agent.

try it. it works every time.

but like i said, im unemployed now, so i had to say Unemployed.

as the woman with the microphone went over the list and each name was called everyones smiles got bigger and when she called the last name the collective sighed in relief was clearly audible which cracked everyone up.

until five minutes later when the woman on the microphone said,

“hello jurors, and now i will call the names for another panel. this one is only expected to last 14 days.”

only? someone said sarcastically which brought more laughter. it was a jovial group. probably because there were hot babes everywhere. apparently summer is definately the time to be called for jury duty since the coeds were home from college, the actors were unemployed since tv season is over, and because people dress better in the summer.

the instructions said business casual but only a few obeyed the instructions. make me go to jury duty And tell me how to dress? pick one and live with it was my attitude and i wore my sxsw tshirt, a flannel, and my cap pulled down almost over my eyes. who on earth was going to have a possible gangmember on their jury? and an uemployed one at that.

here, i said weakly. we had been instructed to say here if she called our name. 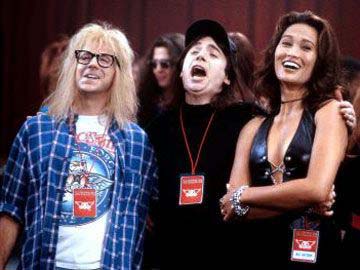 i could handle a one day or two day trial, but two weeks? mr cool did get into panic mode for a second, i will admit. gotta keep it real. but then the lady with the microphone read a name off the list that you would only hear in los angeles

a name that everyone knows. a name that also only in la in a crowded room of 300 only in la would a woman of such beauty blend in and become unnoticed. yes unnoticed because when the woman with the microphone said

every male head shot up from their prayer beads and thought holy fuck tia carrera is here?

and there she was. no make up, hair tied back. reading the paper. and look at that, about six months pregnant. hot, but not nearly as hot as our girl, but yes, that was definately tia carerra. and here i thought that was a stage name. huh.

the lady said ok its 10:45, but they wont be ready for you until after lunch so please report to court number blah blah blah at 1:30p. have a nice lunch.

so bad news: possible jury duty for two weeks. good news: it might be with tia carrera and two other chicks who were so hot that no one had previously realized that tia carrera was in the house.

lets just say i had a good lunch.

until i realized we were all going to have to stand up and state our name and occupation and i was going to have to let tia and the ladies know that i was unemployed. fortunatley a juror can ask for a “sidebar” where he can approach the bench with both lawyers and discuss these matters privately with the judge.

which is what i did when i was the first juror that they asked to stand up and state name and occupation. yes me, the only gangmember-looking dude in the hizzy.

hi your honor, i said.

hello gentlemen, i said to the lawyers.

my situation is that, if you havent noticed, there are two super hot chicks here and im totally down for being on a long trial, but please dont make me say in front of the babes and tia carrerra that im unemployed.

one of the lawyers said, tia carrera’s here?

the other lawyer said, yeah didnt you see the list?

they turned and looked and saw tia carrera and then both nodded silently.

so the judge said, fine, son. youre unemployed. do you think there are any reasons why you cant be impartial in this case.

and i said, nope, but just like those michael jackson jurors, if you dont deliver real evidence, even if i think the defendant is probably guilty of Something, it better be of what he’s accused of and it better be proved in this court or i will vote not guilty and i will argue like crazy in the deliberation room.

and then something even weirder than tia carrera in the jury room happened. the judge said, anthony, do you go by tony pierce?

this was not a young judge. he wasnt really old though, but how on earth…

he asked a few questions and informed the lawyers that i would not be on this jury and then said, but i have something to ask you. how do you find time to write so frequently?

and i said well now i have lots of free time since, like i said, the reason for me asking for a sidebar, im unemployed.

to which he said, but ive been reading you since my son emailed me your homepage url about a year ago when you wrote the how to blog rules. you write just as much unemployed as you did when you were employed. how do you do it?

i said, theres time in everyones day to write two or three posts. just dont get hung up on it. pretend its an email to a good friend. or dont watch tv for an hour and write. or write during your lunch break. it’s not as hard as it looks.

and i thought i was done but the judge wouldnt stop asking me really good questions. fanboy questions! do judges have nothing to do at night?

and then said, i admire how youre handling your troll situation, but i noticed he hasnt written today. did you ban him?

i said your honor nothing on my blog is true.

he didnt get it, so i said. sir, im at jury duty, how could i continue the farce that was tim if i dont have access to a computer? 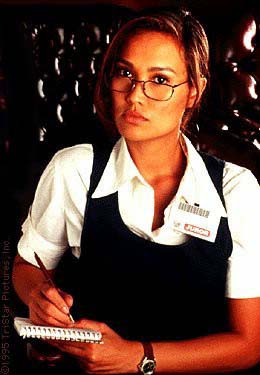 and his jaw dropped.

there was silence and then he laughed.

i was told to go back to the jury box.

and they told the rest of the jury that theyre to come back in 30 minutes when the trial will begin.

and as we left the judge said, mr. pierce and waived me over.

which i must say raised a few eyebrows.

and he asked, but tim’s email address?

i said, its my friend’s in colorado. college pal. we were both into the Replacements. Tim was my favorite album and he’d always give me shit for it because everyone says Let It Be is the best. long story.

and then the judge said, well my kid will get a kick out of me telling him that i shook your hand. keep up the good work.

and on saying, i bet this button doesnt even work

needless to say we took the escalators back down to the jury room and counted the minutes to possible freedom.

which im happy to say we all received.

and to add to the freakiness of the day, as i was looking for tia carrera pictures to put up here i went to imdb to see what other movies she had been besides waynes world 2 and i shit you not she was in one called Jury Duty with pauly shore, which if i had realized the irony That would have been the icebreaker that i was searching for all day to approach her.

something i never did.

but at least now i will be able to go up to her one day and say, remember the day you were on jury duty during that earthquake…