now that i want to spend like five minutes with her shes skeptical and nervous.

we’ll send two sentences via myspace email every other day. i use it because i can tell if shes read it. this is a girl who was my girlfriend pretty much for a year and a half maybe more. who knows. she’d call several times a day. shed email shed chat shed fly out here she moved out here she spent weeks here. and now she doesnt even want to spend five minutes with me, even four, and i understand, ive been freaky with her, not sexy freaky but reclusive freaky like rivers cuomo freaky like i dont have a top hat big enough to hide underneath when she calls me like shes done over the years and i dont know why im wanting to spend four minutes with her. i dont know what id say i dont know what id do i dont know what would happen. nothing would happen if thats what youre worried about. she has a man. lives with the man. gotta respect that. and its gone on for a while now so good for them good for her and good for him because that girl like so many are all about love love love and he will always feel wanted and needed and who doesnt want that. except me.

i finished two days of interviews with prospective companies and i like them all. but because this is a holiday weekend im getting the feeling that im not going to know from any of them what my future holds until at least next week. meanwhile i have this new used car that runs prrrrfectly. so well i cant even believe it. it runs like a car with 40k miles, not more than twice that. i just need a knob for the volume control and a wiper blade. other than that its perfect.

so its 5:37am ive been watching princes sign of the times which was on black starz. prince is playing drums now and wearing a cops hat as sheila e dances around. so what i want to do with this week is drive somewhere desolate. i have enough money to maybe get a hotel room in vegas for a few days and write. the only problem is i dont have a laptop and what id really like to do is finish Stiff and then start something new that id have ready for christmas cuz the feeling i have from people is they dont want any more greatest hits from the old blog posts, what they want is something new that they wouldnta been able to read on the blog.

sadly the only way i can do that is not be in this house cuz when im here all i wanna do is blog fuck and fight. in that order. and eat. ive been eating like crazy. i had two of those new jack in the box chicoplates or whatever that thing is called. basically theyre two quarter cheese patties cheese bacon lettuce and this fancy bun. i had a coupon that gave me two for the price of one, but you know fast food joints, the price of a sandwhich a la carte is ridiculous, so two cipppolates was four bucks plus tax. and it was way too much red meat for this dj.

vegas is the perfect escape route for citizens of los angeles. its a five hour drive for those like me who like to mosey and take little stops and take pictures and meet people. its a three hour drive for maniacs like karisa, and its a one hour flight for people who dont factor in the hour and a half in the airport the half hour on the runway and the hour getting out of the airport and renting a car. thats why i like to drive.

i have an ipod bursting full of new music from missy eliot to the foo fighters to audioslave and the white stripes and the new teenage fanclub. and i have two full howard stern shows i havent heard yet from the last two days. if i went to sleep now and woke up at 1 i could have three howards in my ipod for the trip, the only problem is i would miss out on the blogger meetup on the beach on friday and thats why ive tried my best not to tie myself down to any responsibilities whatsoever for the exception of job interviews and strolls to the curb to move the car due to street cleaning. 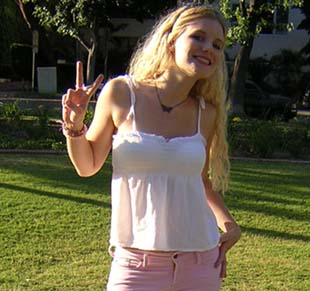 but i have no laptop, but i was watching prince who didnt have a laptop either and then it dawned on me, bring the whole friggin rig. youre gonna be in a hotel room, just set up your shit right there at the dining room table your big computer your big monitor your big ideas by lynda barry and knock out your bullshit.

but you have no stories to tell

the little demon in my ear whispers

oh yes he certainly does

the medium sized demon in my pants sneers

the funny thing is, all i want to do is sit in the giant hottub and sip armerettos.

i wonder if ashleys sister is still a lifeguard at ballys?

flipping through my file-a-dex i stop at a and think ashley, do i have any stories of going to vegas and meeting a blonde teenager named ashley that would be of interest to the good people of the world? stories that i have never told before? tales that have never reached the ears of even my closest friends?

no, sadly ours was a very simple and sweet thing. she said she loved me and i said it back. we’d blab and fall asleep talking on the phone.

until shed scream in my ear and tell me to wake up.

like the sunlight shining through my mexican blanket curtain is trying to do.

six oh one am and if i was smart id get four hours sleep and be at caesars by supper.