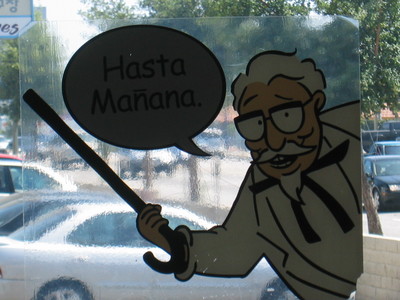 to watch the near-brilliant manner in which the bush administration has been able to deflect and dodge every scandal is fascinating. however, they’re about to meet its toughest challenge next week.

according to the ACLU, a federal judge has ordered the release of dozens of Abu Ghraib photos and four videos documenting the torture and abuse some US soldiers allegedly took part in. ruthlessly.

the videos, one of which last year was reported to contain US soldiers sodomozing boys, have been locked away in Washington.

The investigative journalist, one of the first to break the story of prisoner abuses, said the Bush administration is holding the tapes of these acts, Aljazeera.net reported Saturday.

“The boys were sodomized with the cameras rolling, and the worst part is the soundtrack, of the boys shrieking. And this is your government at war,” he said.

There was “a massive amount of criminal wrongdoing that was covered up at the highest command out there, and higher,” he said.

so my question to the conservatives out there, especially the right wing bloggers and those who comment and support rightwing blogs is

when is it time to stop being partisan?

where do you drop the pretense and bullshit?

you and i can disagree on war and peace, on taxes and national guard records, on social security and haliburton

but are you all seriously going to sit there and be cool with us buttfucking kids?

at some point war crosses the line from being hell and enters whatever gitmo + abu ghraib + no wmd + no osama is.

personally i dont believe that newsweek’s little blurb about the koran flushing caused the unrest in afghanistan last month. i dont believe it becase the joint cheifs of staff said that it didnt cause it, and the main afghani dude said it didnt.

please forgive the pun, but videos of us ass raping kids is going to bring a shitstorm down on our heads like we’ve never seen before. and if this administration is seriously committed to protecting americans in america from retaliation in the form of terrorism, id suggest that the president gets on tv next week and apologizes like nobodies business and fires some people and lays out a date when we will get the fuck out of where we shouldnt be.

but what do i know. i wouldnt even imagine doing the things that this administration and their minions have done in a short period of time.

but at some point their supporters need to take responsibility and say you know what, this is fucked up and shameful and someone needs to go.

judging from the fact that hardly any of them are even talking about this today, id say the outlook appears dim.