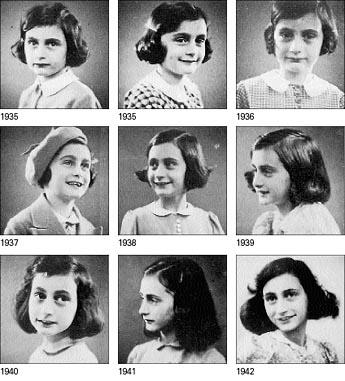 people who would take the technology of their day, which for some were pens and for others, pencils, and write in notebooks, or blank books, or lockable books called diaries.

there were no comments sections, or ads, or pictures (usually), just words, about that person’s life, as dull as it might be.

everyday on the blogosphere you can read people say that their lives are boring and they have nothing to say and theyre not important and what they think doesnt matter.

however, anne frank lived in a one-room attic for over two years with seven other people. most of the time they had to be silent. when you visit amsterdam you have to go, the place is tiny. as in tiny. you dont think that would stifle the writing process of todays average blogger? well it didnt stop miss frank who knocked out the most popular and important diary of all time.

today she would have been 75 years old.

here are some exerpts from her offline journal:

“Our many Jewish friends and acquaintances are being taken away in droves. The Gestapo is treating them very roughly and transporting them in cattle cars to Westerbork, the big camp in Drenthe to which they’re sending all the Jews….If it’s that bad in Holland, what must it be like in those faraway and uncivilized places where the Germans are sending them? We assume that most of them are being murdered. The English radio says they’re being gassed.” – October 9, 1942

On Nazi Punishment of Resisters

“Have you ever heard the term ‘hostages’? That’s the latest punishment for saboteurs. It’s the most horrible thing you can imagine. Leading citizens–innocent people–are taken prisoner to await their execution. If the Gestapo can’t find the saboteur, they simply grab five hostages and line them up against the wall. You read the announcements of their death in the paper, where they’re referred to as ‘fatal accidents.” – October 9, 1942

“All college students are being asked to sign an official statement to the effect that they ‘sympathize with the Germans and approve of the New Order.” Eighty percent have decided to obey the dictates of their conscience, but the penalty will be severe. Any student refusing to sign will be sent to a German labor camp.” – May 18, 1943

On Writing and Her Diary

“I’ve reached the point where I hardly care whether I live or die. The world will keep on turning without me, and I can’t do anything to change events anyway. I’ll just let matters take their course and concentrate on studying and hope that everything will be all right in the end.” – February 3, 1944

“…but the minute I was alone I knew I was going to cry my eyes out. I slid to the floor in my nightgown and began by saying my prayers, very fervently. Then I drew my knees to my chest, lay my head on my arms and cried, all huddled up on the bare floor. A loud sob brought me back down to earth…” – April 5, 1944

On Her Old Country, Germany

“Fine specimens of humanity, those Germans, and to think I’m actually one of them! No, that’s not true, Hitler took away our nationality long ago. And besides, there are no greater enemies on earth than the Germans and Jews.” – October 9, 1942

“It’s a wonder I haven’t abandoned all my ideals, they seem so absurd and impractical. Yet I cling to them because I still believe, in spite of everything, that people are truly good at heart.

“It’s utterly impossible for me to build my life on a foundation of chaos, suffering and death. I see the world being slowly transformed into a wilderness, I hear the approaching thunder that, one day, will destroy us too, I feel the suffering of millions. And yet, when I look up at the sky, I somehow feel that everything will change for the better, that this cruelty too shall end, that peace and tranquility will return once more” – July 15, 1944