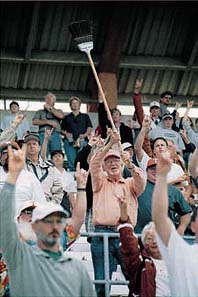 we’re going to try something a little different here on the busblog. why the hell not. its gonna be called twenty minutes with tony.

what im going to do when i wake up is take a shit, wash my hands, brush my teeth and turn on the computer. then im going to walk out to my balcony, look out at the great wide miracle called hollywood california and turn around shut the blinds and go back to my little computer cove.

yesterday i went to a baseball game with a beautiful girl. this is two dates in three days with her so i think im doing something right. and i must say that after seeing the inside of my colon which processed 111 years of kfc, mcribs, banquet frozen dinners, hippie second hand smoke, gallons of generic fruit punch soda, troths of diet dr pepper, and maybe three salads its entire life it looked brand new so three days of a diet of dodger dogs and nachos was a gulitfree indulgent splurge that i might just have to try again.

right now the eagles are on my tivo, a band thats way better on record than in person or on the tee vee. it is pretty amazing how talented all of them were in the 70s and early 80s and how they all lost it all at the same time. not only were those eagles records huge sellers and great albums but frey henley and walsh’s solo records werent bad either.

only reason to see the eagles live is to go to an outdoor venue, get lawn seats and make out on a blanket. 104. don henley is a downer. they shouldnt let him talk. joe walsh is freakier with age. they shouldnt let him talk either. eagles should just have a hot chick with a microphone who roams around the venue with a camera crew and after each song she’s out there the camera crew projects the image on the screen behind the drummer and the chick asks the person in the crowd shes standing next to what song theyd like to hear and the eagles play it.

because the eagles are so polished that its hard to appreciate their genius and talent when everything is so scripted and set-up. call me old fashioned but there should be some sort of i dont know what to call it crispness? daring? thrill? during a live event. risktaking?

ive been to a million concerts but i’ll never forget this one party in this guys house in keeneyville illinios when i was in high school. the drummer had this 13 peice drumset that took up so much room but there were so many kids there that everyone was mixed in with the band that the drummers sweat was hitting everyone but he was smiling so happy and so was everyone else because any minute the cops were going to shut down the party because you cant have live bands playing in peoples kitchens in the suburbs of illinois and they ripped through as many metalica sabbath zeppelin floyd skynyrd bad company foghat and rush tunes that they could and all of them took requests and i cant remember the name of the band but i can remember that feeling of we dare you to impress us, fine heres us impressing you cuz we love those tunes too.

and maybe i should have something ready by 4:20 every day too. like a four twenty deadline or something. not that i need a deadline, but i suppose it would be nice if everyone knew that at a particular time one of their daily reads would definately have something new. fine. its done.

and thus ends twenty minutes with tony. come back tomorrow when i will have startling information for your ass.