rule number one. kiss my ass.

this blog isnt on your screen. its in a computer in a cage in a secure location in southern california, america. land of the free, home of the brave. if you walked down the rows of servers and stopped in front of my cage and bent down and pointed your finger at the hard drive that this blog resides and said blah blah blah i would give just as much a shit as if you typed it in the comment box. and id think youre an idiot.

the comments are there for people to tell me how much they love me. thats what everybodys comments are for. not that any of us deserve any love, myself especially, but if someone wants to stroll down that row of boxes and say something nice to my blinking green light, theyre free to do so, and encouraged. but because im a flawed individual the positive reinforcement will probably only last the amount of time it takes to read it. which is why links to topless photographs with we love you tony written across your sisters tits are so much nicer. and thank you tom and lisa. youre sick people and i love you too.

some blogs encourage debate in their comments. they get their yayas out of having lots and lots of comment traffic over controversial issues, good for them. if that what they like then i hope they get their wish. me, i know where i stand on things and although i do change my mind about things, its unlikely that some dillweed in a comment fight is going to make me see the light about anything. if i wanted to fight shit out out virtually id be more active in metafilter and in the comment sections with the endless amount of idiots over at the buzzmachine. i would never want to be infested with the roaches that crawl through the comments of poor jeff’s excellent blog.

me having comments here is like me opening my living room window. if someone walking by wants to say oh hey tony theyll get a lazymans salute from me and get to watch me flip the page of the newspaper. if they wanna yell love ya man then good. it is not however an invitation to press their nose up against my security bars and complain that my house is a wreck. nigga i know its a wreck. want me to come over to your crib with the black light and the opinoins and judgements? howdy neighbor is all thats needed when you see me through that window. just like in real life. 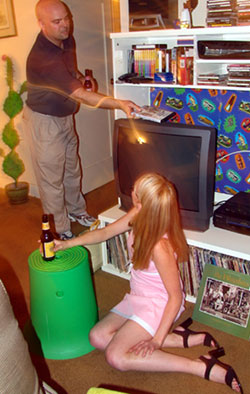 some people get confused. they see the blog in the open public, they see the comments, they see that others have commented, so they figure its cool to just say anything other than howdy or look at my sisters tits. its not. say youre walking down the street and a a big titted girl in a plunging little bippie top and some daisy dukes clicks past you, do you say blah blah blah to her? no. your momma raised you better. and if she really raised you right you say good for you baby, let everybody see what you got girl. damn. and watch how even if shes black she’ll blush and she’ll smile and she’ll stand up a little straighter as she walks that catwalk home. and watch how you’ll feel all warm and good inside.

thats how you should comment on this shit too.

do not impose your bullshit on people who are out there on the limb doing their thing. think it all you want but if you type it in that box thats the same as if in real life you told someone fat that theyre fat even if indeed theyre fat. nobody asked your opinion and in the time of gentlemen and ladies even if youre asked your opinion you compliment and then take a sip of tea.

some of you dont realize because you dont have blogs, but its not as easy as it looks. not for everyone, at least. some of the biggest bloggers dont have comments. i dont know, but i can assume that they think, “fuckit, im already big, i dont need comments because if 1,000 hits mean that 2 idiots a day will say something stupid, 5.000 hits a day means that 10 morons will get brave, its my show i will provide the commentary.”

im not like that. im a real libertarian leaning american. i believe in the freedom of speech and small government. therefore i believe in the use of comments even to the cowards who chose to use them anonymously. they have their right to be pussy ass bitches and i have my right to call them on it. every time i delete a comment it pains me because as a black man i am overly sensitive to freedom, including the freedom to be a dick in a comment box of a gayass blog. particularily since im occasionally a dick in the post. in the many years of this blog and the tens of thousands of comments, ive deleted maybe 8 comments. if yours got axed you were probably being a dick. fuck you try it again.

my mother is the most important person in my life and shes reads this blog and probably hates seventy five percent of whats in here if not more and i do not care. that doesnt mean i dont love her, but her giving me advice on how to clean my room at 111 years old gets as much attention as her feelings about what i write

that ends up getting sent to some other computer

that ends up getting sent to some other dumb computer

that eventually ends up getting sent to the server in the cage whose zeroes and ones we’ve all agreed equals the busblog.

so dont think that your blah blah blah will effect me in the slightest.

so save it and let me finish doing nothing with my window open.