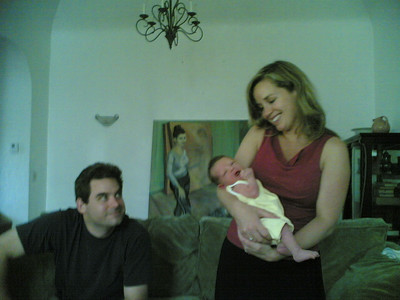 so lets do thirty five minutes with tony and now heres your host tony.

first lets all give major props to my beautiful attorney kim and the host of this site os for bringing into this world beautiful henry who i, if i was a good uncle, would have visited by now, but i suck. so here you are dan, a picture of the lad, which now proves im not gay. long story.

ive been drinking so forgive my typing. its been a tough few days. last night i was up till all hours putting toegether the book which is coming a long way better than the last one thats for damn sure. normally i hate going back through my old shit and wincing through all the crappy parts to make it to a good line or two. but the poems and “unreleased” materials that he strangers have asked for arent bad, even to me.

i have a very odd selfimage thing. its not self image. its not self confidence. i dont knowo how to describe it. its like, i know i can write at a certain level, but professionally?> not quite sure. if you havent noticed i havent written anything professionally in a while. hell i havent done anyting professionally in a while. but i know i can write at a level and maybe that level is the blogging level. i know i can make a blog that isnt completely boring. anything above that im not so sure about and i cant really listen to my friends cuz theyre my friends of course theyre gonna say nice things and i cant listen to my enemies cuz of course theyre gonna say mean things.

and i cant really listen to strangers cuz theyre bombarded with shit on the daily so what do they know. and i cant really listen to my mom cuz shes my mom and she hasnt read ee or bukowski or listened to never mind the bullocks so how is she supposed to relate. so the best thing to do is just keep my head down and type and never look back and to be totally honest with you i hardly ever look back at anything i write because if i did i would probably do like what flagrant does and edit and eventually just start deleting shit and the weeeeeeirdest thing about when i was applying to grad school was i put a ton of poems on here and then i just ended up linking to a poetry collection and i asked people what two poems they liked the best 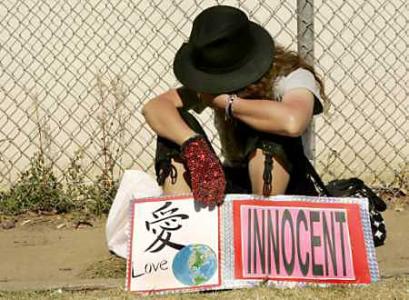 what i wanted to talk about was how i felt so sorry for nancy grace, the courtv witch who also does some work at CNN. poor nancy totally had it in for the king of pop and it was fascinating watching the lawyer berate Juror #1. somehow she got an interview with him right after the trial which they broadcasted live. and at the end of the interview she asked the THE perfect question so ive gotta give her props

and the dude, who was a decent dude, infact i listened to all of the jurors and they are full on central coast californians meaning theyre just like middle-americans – totally normal people. he said what i think he did with those kids doesnt matter.

she said, of course it matters you saw the whole trial it was your job to decide what he did with those kids.

and this dude with his stupid Harrah’s trucker hat and his im-a-55-year-old-father-of-four-moustache said no, my job was to look at the evidence and decide from what we heard in that courtroom.

and poor nancy grace wanted him to put his own opinion in the verdict, just like she had. she didnt want him to pay attention to the evidence or the testimony, she wanted him to do what so many people did today, which is throw out the trial and judge michael jackson for being a freaky dude who is either truly a loving man or a kiddie molestor.

and i say poor nancy grace because cnn and courtv should fire her ass for being a horrible representative of the US court system and for not understanding what the foreman of the jury truly got: leave your biases at the door, the only thing that matters is what goes down in the courtroom.

this o’reilley style of rightwing faux-rage is a fad that i thought cnn was taking care of by axing Crossfire. CNN used to just tell you the news and then break for commercial, why does Nancy Grace have to ignore everything that happened in the case so that her pre-conceived biases can be appeased?

hell just about everyone she interviewed said that the Mom was insane and a mistake to introduce to the jury, everyone agreed that the DA totally went overboard with the 100+ search warrants on Neverland, that the Conspiracy charge and the False Imprisonment were bogus and distracting, and that most of the prosecutions witnesses totally flipped when they got on the stand and said that MJ wasnt the monster that we all assumed that he was.

so get off it nancy and just say, huh. weird. is that so hard? the whole time i kept thinking of that elvis costello song “you’ll never be a man”. the reason men love women is because we’re the hardheaded idiots locked into our caveman mentalities of imrightimrightimright. fucking watch the precedings and report on them ho and if things dont go along with what you expected say wow things arent going along the way i expected.

or quit and move to fox news where michael im pretty sure was pronounced guilty.

today the cubs got their asses handed to them. the announcers didnt say the scorekeeper got it wrong. the announcers said the cubs played like shit and dontrelle willis is a fucking stud who the cubs are probably kicking themselves for giving up on so early.

but what are we saying to the precious kids when we cant admit that we’re wrong?

our pal the Instapundit is in an iteresting situation that one of our fine commentors pointed out this morning. right now he’s on a much needed vacation. i poke fun at the good professor but you cannot deny the fact that he is a tireless blogger, and if one day its revealed that he’s had an intern or twelve who have helped him knock out those 30 posts a day then we’ll all understand, but glenn on vaction today linked to another righty blogger who thank God denounced this new Hillary bio. 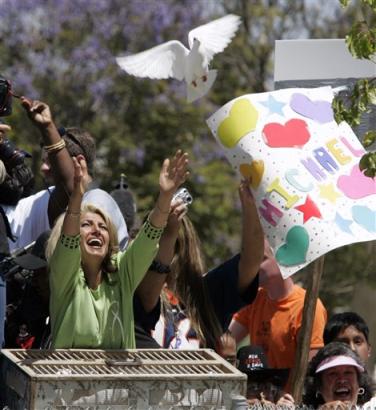 have you heard of this book? its called the Truth about Hillary, because apparently i guess it isnt enough that she stood by her man during the 8 year witchhunt, and it isnt enought that shes held her own as the junior senator, and it isnt enough that she just might end up being this country’s first woman president – a long overdue accomplishment for the land of the free, and we could do much much worse – so they have to get the smears in early and often because the next presidential election according to the fearful is right around the corner.

anyway in this book, it is revealed via our pal Drudge, that President Clinton raped his wife Hillary and in that violence Chelsea was conceived!

and she is a lesbian.

now nobody in their right mind really believes that Bill raped Hil and out poped Chelsea. nobody. plus how could you prove it? unless Bill and Hil hadnt had sex for a month other than the time bubba got shitfaced and rough with his wife and then she didnt let him get close to her for a long time, how would anyone know? the only person who would know is our next president and why on earth would she ever say that to anyone?

now the Instapundit is in a sticky situation because, i dont know, if I found out that someone was giving me money to spread such implausible, outrageous, below-the-belt, tastelessly vicious lies about Sen Clinton regarding her DAUGHTER’s conception, i think i would have to pull the ad and give back the money. even if i was on vacation. because one would imagine if one could post from a hammock one could dial up blogads.com and click delete to the $$$ ad. trust me its as easy as cracking open another tall boy.

the right-leaning Wizbang also finds himself in a similar situation and he does a pretty good job of describing the passage in question, but excuses himself for running the ad by saying that when he accepted the ad he had no idea what was in the book.

but my question to him in his comments, and now in this post is, well now that you know part of what is in the book, why dont you do the right thing and cancel the ad?

or have we turned into a blogosphere of ad-whores who selectively talk about morals
only when its convienent?

and by we i mean you.