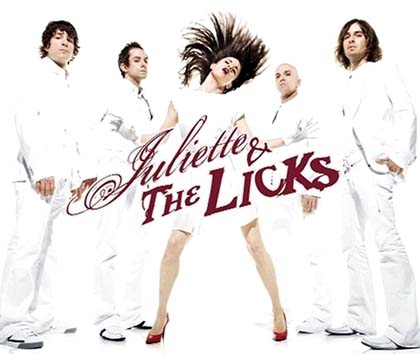 todays juliette lewis’s thirty second birthday and if i was her boyfriend id keep a lot of rope around because i have a feeling id have to use it quite a bit.

and maybe thats one of the problems that i have, im never satisfied with whats right there, i have to try to balance even perfect things out with something either restrictive or flamable when all i should have done was obey fat joe and just lean back lean back.

unfortunately whoever is producing juliette and the licks arent listening to fat joe either because what i guarantee you is an emotionally captivating live performer is not what i hear on this record.

the songs sound somewhat familiar but they lack everything youd need a rope for. theres no brattiness or youth or anger or life. you dont sit there with your mouth open you dont take a zillion pictures you dont gasp and scream along and jump into the pit.

its almost as this record would be the demo that youd cut for prospective musicians who wished to audition for the band so they could learn the changes. its a blue print for something better. its the x’s and o’s on a whiteboard its not the magic and poetry and electricity, it’s the notes.

juliette lewis was rocking harder than this when she was 14 and holding her own against deniro. she was rocking harder than this when she lured brad pitt into statutory rape when she was 16. juliette lewis is one of the few people who really can act more of a rockstar than a lot of rockstars because she can everything which is a lot different than being able to act like she can do everything.

the slow tunes on here have to be slowed down, i know shes hyper but they should have been recorded late at night after hearing darkside and riders in the storm. she should have been properly bound and if she tries to go faster she has to do it twice as slow. and she has to kiss someone. not me. she can kiss me when shes done.

the fast songs need to be twice as fast and three times as loud. this is only juliette and the licks, not juliette lewis and the licks which means give me more fucking licks or change the lie in the name. yes shes the star. shes a star among stars but make her fight to grab your attention in the recording. pulling her up through the mix is a vote of noconfidence.

its far too clean far too organized, there are no risks, there is no spontinaiety. its mostly not rock n roll. its pop. pop is usually bad. if i was producing this record it would be produced live in a storage facility. there would be a few hundred young people in there with us. there would be mattresses on the walls but not perfectly. i would tell the kids that if they made a fucking sound i would mace the whole place and steal their shoes. but they should dance if they knew what was good for them.

and what youd hear on that record would not sound like whatever this is which im sorry to say on your birthday baby sounds like an actress’s vanity record. it sounds like a mustang thats been broken and defeated laying in the dust. they eyes blink but theres no light there. no spirit.

this record isnt sure if it wants to be the unforgetable fire or any random demo tape you’ll see in the dumpster behind any la record label which is a shame because tracks like “got love to kill” and “this i know” hint at what juliette delivers live, but theyre brutally overshadowed by sappy worthless messes like “7th sign” which will make you drunk if you take a shot with each wince.

record this hellion without the ropes next time and see what happens cuz this could be confused for a lindsay lohan cd one day.