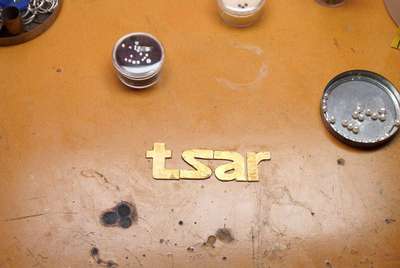 six days. six days my friends. remember how everyone took pictures of themselves when they bought “how to blog” and i put those pictures on the busblog? yeah me neither, but someone reminded me that i did it so i will do that for the new tsar record too. whattya think of that.

now let me ask you a question. did i ask anything of you people when i was laid off?

did i beg for money or put out a little book of old posts for big bucks. even when you said youd buy it? no.

i am not asking you to buy this record when it comes out. im pyschicaly willing you to do it. i am using all my esp power that i have. im tapping into the force. im using my powers of good for evil. fun evil. im hypnotising you. your eyes are getting heavy. youre getting very sleepy. this is why i dont podcast. what you will do is go about your daily journeys and on tuesday you will go to the record store and you will get the new tsar record

you will tell the cashier that tsar is amazing and there should be a poster up. ask them why there isnt a poster up. if theres a poster up you will say why the hell arent there two posters up. why isnt it in the window you will demand. and then youwill ask them to put it on the speakers right there in the store and you will command them to crank that shit. you will, in fact say crank that shit buddy. and when the song is over you will say now that you little hairless freak is rock music.

what songs should you demand? quite frankly you cant go wrong with any of them.

it starts off blazing out of the gate with the noisy title track Band Girls Money. whalen alleges that the president sneaks when he walks down the street, hes got a stove pipe hat and wooden teeth, then jeff reveals that his girlfriends name is kathy wong and all hell breaks loose. 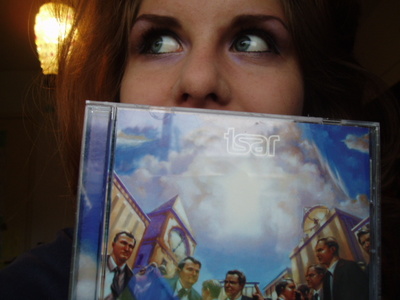 meanwhile lead guitar player w. daniel kern is shredding through all of it, taking breaks only to reload the flamethrowers with gasoline.

it stops hard and fast on a dime. Wanna Get Dead, which ive arranged to be the second song pops on the first beat. whalens actually in there before the music even starts talking about all the pictures he has of people he hates. he calls someone a fucker. and sings about wanting to get dead. “its hard to take a stand with all the women on your lap” is not about me so shut up. its a top 40 single if ever i heard one.

next on the love parade is my favorite track Wrong. on this one whalen screams and we feel it. number one hit if ever ive heard one. with a bullet. it should be in every movie.

following that in my lineup is Everyones Fault But Mine with its ominous bass riff which should get snapped up by a commericial just like the title track and Straight were (BGM is currently being played on the Nestle Crunch commersh and Straight was used for the Nissan Xterra).

next comes my second favorite track on the album Startime which i had linked on this blog for maybe six months with its big horns, non stop guitar, and perfect lines “and if you dont like that why dont you go home and watch some Tivo, fucker.” what can i say, the hey hey never let me down.

go glam the conqueror worm is next, then the ultra rockin Straight where whalen through mascara and pink sneakers pleads to the world that hes no tom cruise, “all the dianetics on the miracle mile know im straight.”

then theres the Love Explosion and it ends with You Cant Always Want What You Get which the band never plays live and is therefore something that i listen to all the time because its the closest thing to a “new” song that a friend of the band will get to. and its good.

this summer please buy the new Tsar record in six days. if you take a picture of youreself with it i will put it up on here. and i will be happy. and you will be the owner of a truly good american rock record which is just as good as any of the other crap thats out there, i can tell you that right now.

my single mom life + dan who + michele + moon over pittsburgh