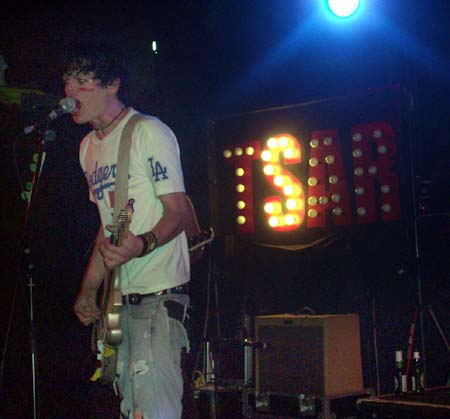 Andrew in England wrote a great review of the Tsar show on Tuesday and thanks to the miracle of the Internet he wrote a review, emailed me some pics and we shared a pleasant conversation.

Here is a snippet from his review:

Backed by a red board with their name spelled out in light bulbs flashing each letter in turn, T-S-A-R launched into Straight. Whether they were pushed for time, don’t like applause, or always do it like that, they proceeded to run the next 3-4 songs back to back, stopping only to tend to Jeff’s malfunctioning guitar pedal. Was it fixed? Who knows! Jeff slinked back towards the mike announcing “We’re experiencing technical difficulties”, stamped on the pedal a few times, turned to shrug at Daniel, and burst back to life for another 8 minute medley to round things off. Aside from the previews available via their MySpace page, I was unable to make out (either from the songs themselves or the introductory statements preceding them) anything familiar. That they didn’t play anything off the first record is a shame, hearing Teen Wizards live would’ve had me bouncing off the walls. Still, a thunderous recital of Love Explosion almost made up for it.

As they wandered about the stage collecting their kit (Jeff donning his David Hasselhoff cape) I wondered if they’d had any fun. Jeff maintained his Joker-esque beam throughout, even containing laughter after dodging another disposable cup of beer. The crowd (what there was of it) was entirely apathetic; no doubt they were unknowns to everyone but me (and the long-haired chap against the guard rail who solicited a congratulatory handshake from bassist Derrick Forget). I can’t help thinking that with better promotion and a room of open-minded punters (as opposed to a hundred drunken louts and a handful of ill-tempered, aged punks) a Tsar gig would be a riot (hell, I know it would, I’ve read the reviews). I only knew about it from a cursory scan of Tony Pierce’s busblog, and wasn’t sure until seeing the words ‘supporting Towers of London’ plastered across their (oft-unavailable) website (the Wedge trotting out its customarily vague ‘… plus Special Guests’ catch-all).

you can read the rest of it here.

and here is part of our email exchange: 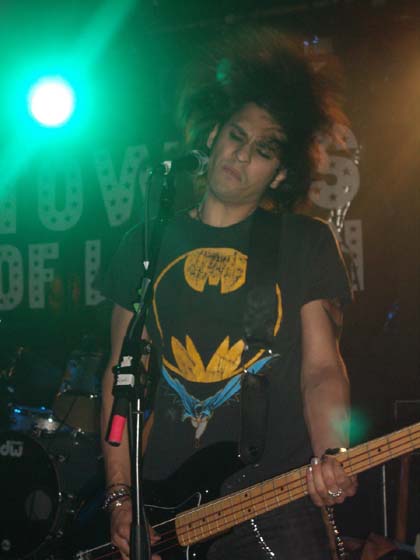 >
> Tsar has played many many gigs and some are exactly like the one you
> attended where nobody knows who they are and its too late in the night
> and people just stand there and stare. And like you said, sometimes
> they play shows where people know whats about to happen and they eat
> it up.

It’s a shame, because they’re one of the few bands that makes everyone
stop talking and listen whenever i stick them on in the car. I thought
that principle might translate to the gig environment too;
unfortunately, on this particular occasion, i was wrong. Just hope it
doesn’t make them think twice about coming back.

>
> I agree with you that they should play some of their old tunes but for
> some reason they only want to play songs from their new record. Maybe
> theyre bored from playing those old tunes for four years? I don’t
> know. I do know that I too miss hearing Teen Wizards, and I Dont Wanna
> Break Up, and Calling All Destroyers.

I’ll admit, the prospect of hearing anything off the old record was
what made me put the money down (that and wanting to push some cash in
their direction). If they’d have played the entire thing all the way
through i would’ve stood in quiet awe before going home sporting the
most enormous grin you can imagine. Obviously that was never going to
happen, but i was holding out for maybe one or two songs.

Still, you’re right. They’ve got something new to promote – and doing
anything for four years solid has got to get a little tiring.

>
> As for the blending of songs together one-after-another. Thats
> something that Tsar likes to do. In the LA club scene people have a
> million things to look at and do, and watching the band is only one
> option. I think Tsar does that to entertain the short attention spans
> of todays hipster while presenting a sliver of faux professionalism.
> Thats a tight band. They can stop on a dime if Jeff wanted them to.

That’s the impression i got too, even with the problems they had
(heck, they even sound good as recorded on the crappy microphone of my
digi camera standing a foot from the speaker tower).

>
> I’m so happy you went to the show and your review answered the
> question that I’ve had for a long time “who the fuck are the Towers of
> London”.

Rest assured, this was a gap in your knowledge barely worth filling.