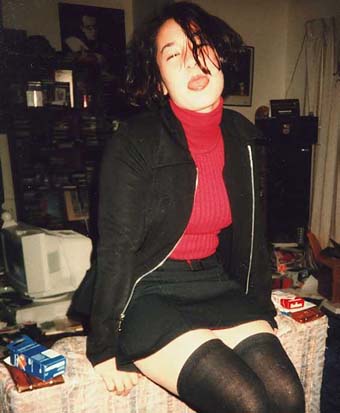 on a campus surrounded by beach there were hot chicks everywhere. she was the type of girl who was so sexy that she made you repeatedly reevaluate your girlfriend.

and lots of the boys would say the wrong things to her and she would just exhale and run off or hop on an awaiting scooter.

magic powers of seductiveness that was equalparts innocent and guilty witchcraft and so natural.

she once made a man jump out of a two story building wearing a dress breaking both of his legs.

but theres no doubt

well somehow she ended up in the navy.

and the navy tamed her.

some folks say she was ready to be tamed and the navy was the luckier of the two because she could have sunk the whole damn fleet if she wanted, but she not only obeyed, she excelled.

one night she visited me in my san francisco bachelor pad, at the time she was stationed at treasure island, not far away.

in the middle of the night i noticed she wasnt next to me and i heard scrubbing and i went into the bathroom and she explained how she hadnt cleaned a head in over a day and it was weird for her.

so i let her clean the head.

so it wouldnt be weird for her.

where all the inmates love her.

and just last week she was on her vacation and she came through town and we ate at fred 62, the hip little coffee shop on vermont, and we drove around hollywood and beverly hills and sunset plaza drive, and everyone has a few people in their lives who will always love you and in their eyes you can do no wrong.

and thats how i feel

craziest girlfriend i ever had.