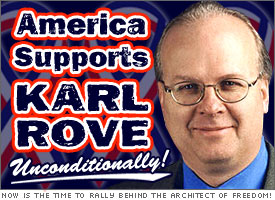 and since the professor, like the good company man that he is, wont comment on the first two questions asked to the president yesterday in regards to our lovable chief of staff, someone has to take up the slack.

to his credit he did conveniently link to video of wonkette saying that rove didnt break the law, but where was his link to monday’s press conference? i mean, sure, amc is cute as she rolls her eyes at hugh hewitt’s war on terror mantra but scotty’s bad day was comedy gold, and, its actual news. if glenn is saying that wonkettes opinions now suddenly matter then i look forward to seeing him link to her once the rest of these sources get revealed and we find out who miller went to jail to protect.

but since the alleged libertarian is doing what he always does when dark clouds float over a republican garden party, which is put his hands over his ears and say lalalalalalala, occasionally throwing us a bone or two of quasi rove coverage, i’ll throw one back and take time out of my busy evening and give you all a karnival of karl that the worlds biggest blogger doesnt want his readers to see

“”karl rove” is the number one search in technorati. could they be looking for his nipple slip?

“The Big Lie About Valerie Plame” – Former undercover CIA operative Larry Johnson goes on the TPM Cafe to bear witness that Plame was indeed undercover when Rove leaked to Novak that she was CIA. He also dismisses the allegation that she greenlighted her hubby’s trip to the dark continent.

The Republicans insist on the lie that Val got her husband the job. She did not. She was not a division director, instead she was the equivalent of an Army major. Yes it is true she recommended her husband to do the job that needed to be done but the decision to send Joe Wilson on this mission was made by her bosses.

At the end of the day, Joe Wilson was right. There were no weapons of mass destruction in Iraq. It was the Bush Administration that pushed that lie and because of that lie Americans are dying. Shame on those who continue to slander Joe Wilson while giving Bush and his pack of liars a pass. That’s the true outrage.

how come i havent seen Johnson on tv saying this stuff? oh thats right because my tv is fixated on that chickie in aruba. will someone find her already?

Can Bush Survive Without Rove? “Bush’s Brain. The Architect. Boy Genius. Fired?” – when youre GOP4LYFE and even Fox News is beginning to build your casket, the end is near

“What’s the Real Story on Karl Rove?” – news from occupied Iraq speculates on what was in those eight blank pages that could be the clues in the investigation of the “very serious crime”

The prosecutor can indict under any statute, including simply leaking classified information. Is Rove afraid of being indicted under that law, not just the one that makes it a crime to identify Plame? Mehlman raises a further Rove anxiety. No, Rove didn’t “reveal the name.” But the law doesn’t cite that as a felony; it only specifies revealing the “identity” as a crime. It says nothing about a “name.” Rove revealed “Joe Wilson’s wife.” That qualifies as an “identity.” 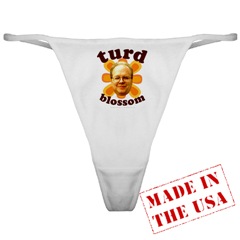 sure does, doesnt it.

ive never heard of The Brad Blog, but he has an exclusive with Joe Wilson who surprisingly said that Rove should be fired and lets Brad know that he will be reading a letter on the Today show this morning from Bush Sr. where 41 told wilson that he agreed with alot of this column that the former ambassador to iraq wrote in 2002 with tips on how to deal with saddam.

shulzone links to whitehouse.org who has an easy-to-print letter of support for mr. rove. and turd blossom panties! (three words i never expected to type in my life. i take back saying that ive done it all.

Karl Rove, Whistleblower
“He told the truth about Joe Wilson” – where the wall street journal both defends rovey and misses the point entirely. this isnt about wilson lying, this is about the white house leaking classified information to the press. i have always maintained that if rove had simply told novak, miller, et al “we didnt send Wilson to Africa, the CIA did” and left out “… wilson’s wife, you know, the cia spook…” we wouldnt be here and id be telling you about the blonde i just fingered. but i guess the chief of staff and the wsj make mistakes too. me, im perfect. alwas.

the wsj’s blogger james taranto sez that this isnt blood in the water, its chum. then riddle me this batman, whys the whitehouse keeping mum on the chum? those fuckers love to talk shit, and when that doesnt work they just flat out lie. are you saying that this silent treatment is a change-up designed to make everyone whiff? if thats the case then fuckit – turd blossom in 2008.

Lawyer: Cooper “Burned” Karl Rove – the national review talks with rove’s mouthpiece who explains how the reporter who was going to go to jail to protect his source infact damaged the source. then he tells us wtf Double Super Secret Background is. sadly its not a new ben and jerry’s flavor. however my sources tell me that theyre feverously working on Turd Blossom Mint Chip before this heatwave settles down.

blogs for bush only had one post in defense of their boy rove. mark noonan argues that “there is nothing to the story”, asks “why all the fuss”, blames the left for manufacturing “conspiracy theories” about the blameless rove, finds it in his heart to explain the JFK conspiracy theory to his readers(?), and asks “Honestly, what is next? Are we to investigate whether or not President Bush is covering up aliens at Area 51?” wait, is that how he carried new mexico? fucking aliens.

And then of course was the “I also will not prejudge the investigation based on media reports. We’re in the midst of an ongoing investigation, and I will be more than happy to comment further once the investigation is completed,” that President Bush gave the press when he was asked about Rove’s leak.

to which Joho the Blog wrote, “I agree it’d be wrong to judge Rove based solely on media reports. So, W, here’s an idea: Turn around and ask him.

one thing i definately agree with wonkette about is she wins yesterday’s headline-writing contest
Leak: Bush Holds Tongue on Probe

i dont care what the rabbit says, i heart the wonkette. hi baby.

Newshounds watches Fox so i dont have to (thanks pallies!) and reports that on Hannity & Colmes “Alan Colmes started off the interview by asking an excellent question: ‘If Karl Rove wasn’t revealing something secret, why did he have to speak on double super secret background?’“

and you know, if the instapundit wanted to actually earn some of those hits, maybe he’d answer that for us. which has me thinking, do you think that in class he only answers questions if you raise your right hand? and only if your (fake) name is gannon? although i love his google ads.

and thats how you fucking blog a carnival