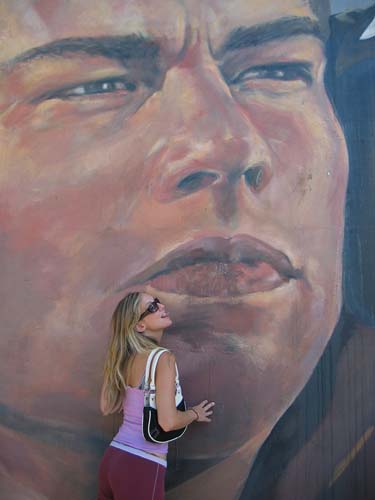 it started early with the maintence man coming over to check out the mysterious leak in my walls. he was here at 8:30am bright and early. his english aint so good so there was no negotiating which is too bad as i normally hit the hay around 5am and last night was no exception. he inspected, we shook hands, and he laughed at my pajamas that had been turned into summer pajamas after a few snips of the scissors.

i then took to my closets and filled up bag after bag of ridiculous tshirts and fucked up pants and simultaneously converted my podcasts of matt welch and raymi de minx into bite sized mp3s and all was well until karisa j called me up for a suprise luncheon.

its funny how when youre really rocking the whole world can pick up on yr vibe and want to get in the way hang out with your black ass, or call you, or message you, or do you. karisa (pictured, left) just wanted lunch so she picked me up in her new car and we jetted down the block to fred 62 on vermont, the hipsters diner.

karisas car will be featured in the upcoming one minute short that i will be linking to tomorrow, and because i have no tact the second she picked me up in it, and not her recently traded-in Xterra, i sat in the seat, hugged her, and looked around the brand new nissan sedan and said, your pappy let you have the keys to his car? followed by about five more one-liners ending up with “are you married to a young doctor or some shit?” to which she punched me in the arm hard and i shut the hell up.

for as good of friends that we are we really dont see each other all that much so having sandwiches on a hot afternoon was superfun. i tried to podcast part of our conversation but trucks passed by at the wrong moments and the only other dude near us chimed in when we were talking about what music we were listening to, and then the battery died, a sign from above that we should just keep it between us, which is usually what we do, however i had to snap some pictures since it was such a beautiful day and rarely do we see each other in the daylight and only an idiot could fail at such a hot subject in natural light.

i will never be mistaken for a photographer.

almost as soon as i got home my xgirl ashley (pictured, below)called. we’d exchanged some snotty emails over the last few days and she wanted to set things straight and an hour later things were straight and we had completed our first polite conversation in over two years with plans of maybe seeing each other on thursday. i told her that this was the week of getting my shit together and she was definately on the list, but that thursday was when i was expecting to get my car back out of the shop so maybe i would have to dine with her next week. it was nice to talk with her and its weird how good feelings from the past can come back during the weirdest moments.

then my mom of all people called me and she hadnt been keeping up with the blog so she didnt know that i had quit smoking weed. so i told her. and she was shocked at how long it had been a habit for me. she was so happy it was sweet. but i didnt lie i told her that it was easy to quit and im not doing it for exactly the best reasons, and that i will smoke again one day, just not any time soon, and it wont be habitual, it will be occassional. she asked me why i couldnt get high off life and i said mrs reagan i get high off everything including life. i love my mom and i know i made her happy.

as i was doing my dishes the activist formerly known as my true love called me. we talked and she wanted to know if i had called my other xgirl jeanine and i hadnt so i called her, meaning in the span of two hours i had contacted three xgirlfriends with plans of having heart to hearts with all of them within the next two days. the plan chris wanted me to fulfil was for she, jeanine, and i to have dinner on friday and drink a bottle of wine that i brought home from spain in 2000. jeanine and i had a long cathartic conversation that included raised voices on her part and shhhh shhh on my part peppered with i love yous on both sides. and even though it was all good i was beat and grateful that i had warned you, my readers, that the busblog wouldnt be updated all that much this week because some serious shit was going down. good shit.

then matt good emailed me ready for a podcast, then raymi emailed asking wtf is up with our podcast, and i had to tell them both to gimme a day cuz i was emotionally drained, and being mellow cannucks they were cool.

at this point it was dinnertime but i wasnt hungry after the charles bukowski on rye that i downed at freddies. as karisa pointed out the ham and cheese sandwhich is advertised as being served on sourdough and she asked me, shouldnt it be on rye, and thats why i like her. not because of her hotness but because of her coolness.

i hit the sofa hard. the cubs were getting out of a rain delay and were about to chat with my favorite xcub mr bruce sutter. and before they could return from commercial to interview him i was out. i woke up and it was a tie going into the 8th, the game crept into extra frames and in the 11th they lost a heartbreaker due to a double play with derek lee standing in the on-deck circle and if i had a gun id had shot my tv.

then i got up, poured myself a huge glass of water, worked on my soon-to-be completed book, then checked out the real world which was disappointing and Big Brother which made me stand up and clap several times and renew my faith in humanity and got back on the computer, told the lameass commentors on the buzzmachine that they are lameasses, learned so much as usual from metafilter, edited the photos that i had taken of karisa, uploaded the lil film i made embarrassing her, and then began this blogpost which i dedicate to good old number 42 whose wind-up and delivery i have mastered and will mimic if i ever get the chance to throw out the first pitch at wrigley field, which is one of my secret unattainable dreams of which i have many, several of which have come true over the years to my complete surprise.

and whoever invented naps, i kiss you.

the podcast interview of raymi the linux is up