im remembering this because of emmanuelles post where she reports on a challenge that i was given.

we were talking about morrissey’s new cd and how he sings about how america acts superior because we gave the world hamburger.

some one said, are you serious?

i said, yes, other than french girls and swedish girls, (i forgot to say asian girls but i was drinking, and think even less during those moments) america has given the world everything that everyone loves

and thats why they so desperately want to be like us.

ugly americanism at its best.

and only mostly true.

around 2am we were debating free trade.

we’ve come a long way since dropping acid and gazing at the palm of our hands.

i was all, i have no problem giving Nike a bribe, i mean a tax cut, i mean an incentive for setting up a factory in hollywood so that americans can produce $150 american-made shoes that can be sold alongside the $100 indonesian-made sneakers.

let the lebron james shoes or the new air jordans get made in america. the 75% price increase will more than absorb the cost increase of american workers and the union they will probably join.

and i bet all the cool kids would be more than happy to have the latest kicks made in hollywood… where dreams are born.

tim blair and welch of course poo pooed the idea, unfamiliar with logic and progressive ideas, rigid in their hardlined freeeeee-traaaaaade mantra. ambivalent to the fact that when americans had jobs under clinton the economy boomed, there was prosperity, and there was no need to inject the collective psyche with fear.

their philosophy, i imagine, is that as developing countries come out of their tin shacks to nike factories to earn their $5 a day, those countries will begin to prosper and they can then import american goods and services.

sorry, but i dont have 100 years to wait for such malarky. and why are some people so hesitant to infusing THIS country with the aid that they’re so willing to ship off around the world?

have you ever spent much time in downtown LA?

it’s my belief that a strong american workforce will inspire a stronger american entrepenuer culture. one that will take what successes it learned here and go to foreign lands and start up newspapers, soul food chains, and Foxy Boxing circuits.

a shoe factory in hollywood or compton in 2004 producing quality trends will not only foster a work ethic that exists in every zip code in this country, but it will create generations of americans who can have pride in what they do, while improving their currently dilapidated community from within.

no offense but fuck indonesia while ive got concerns in my own backyard.

of course my ideals were shot down by the learned gentlemen of letters, so i brought it home.

america is the worlds breadbasket.

i pointed to blair’s pack of smokes.

i said, from what i can assume, a pack of cigarrettes contain about 1/8 of an ounce of tobbacco. from what ive read, 1/8 an ounce of marijuana goes for about $60.

the cost of cigarrettes to the manufacturer, including advertising and shipping, etc. is probably about $1 a pack.

i said, you could put a $14 a pack tax on marijuana cigarrettes, if you had the free trade courage to legalize it, and with the tax and production revenues, pay for all the education and free health care that the dems cry about, but you could also pay off our debt and probably have a little left over for all the bombs youre dying to drop on the taliban.

america would have an export that could be made in the usa. the quality would be unmatched. their boys, big tobacco, would have the new product they are dying to release, and the enviornmentalists would be thrilled because hemp would replace trees for producing paper.

and the Christian right would be appeased because god’s happy plant, so perfect you plant a seed in dirt, water it, and it creates a weed that when ingested makes you smile, would be freed to do what He intended it to do.

but the only reason you wont do it, i posed, while lifting my half drunken bottle of rum at them

is because youre racists, and you know that by keeping weed illegal, you keep minorities under your thumb, and in prison

where you think they belong.

and thats why people take me into dark alleys and beat my ass when i say shit like that in the xbi.

welch and blair, gentlemen that they are, just laughed and called it a night.

we must find a better word for that). although i give glenn a hard time every now and then he does deserve his props.

for rightwing propaganda hes pretty much at the top of his field. and Lord knows toeing the party line has gotta be tough under this administration without even once saying “goddam those motherfuckers are so full of shit today even I can’t stand it!”

but somehow he soldiers on and delivers twenty to thirty posts a day on a variety of topics from “whoops look at those nincompoops the NYT” to “hey look at those idiots over on the left” to “omg look at that fat drunk teddy kennedy” to “fuck the UN” to “lets talk about space”.

while most of you slackers are lucky to post three times a week the instapundit has already lapped you before you take your first bong rip, and for that reason alone you should respect him.

he also gets more hits an hour than most of you will get your entire lifetime and thats why you should fear him.

because i still have a little resin in my cranium i chose to discount his approach, content, and lack of transparency but hopefully i always pepper it with not-so-sarcastic praise and awe because what he does is far tougher than it looks. shit, even drudge gives the dems some love once a day and doesnt have the balls to claim to be moderate, let alone libertarian.

people ask me all the time why i spend so much time paying attention to the good professor and i always want to say that a blogger who ignores the instapundit is like the oakland a’s trying to ignore the yankees: you might not like the way they do shit but youre a fool if you dont study them and find their weaknesses and exploit them to all hell.

one day guys like glenn and charles at lgf will sit down with me or allow me to podcast an interview with them and you’ll see that i kid because i love, and i do love instapundit.com if for anything he makes me feel punk rock and honest and young and transparent.

and its nice to know that my hits have doubled each year over the last two years without an instalanche, which should be a lesson to all of you: you can diss those who could help you and stil thrive. you can criticize those you respect and not be shunned. you can tell it like it is and not be buried. so speak your mind young bloggers and dont worry about burning potential bridges, as long as your critiques are factual and not personal you have nothing to fear.

however, if you kiss the right people’s ass you’ll get hella hits. so choose your battles and be wise about who your allies might be.

in yesterdays post the instapundit says that he doesnt editorialize much any more and he’s right, he lets those who he links to do his dirty work. learn from that young jedis. learn from that.

happy blogiversary instapundit, youre one of my favorite bloggers and most-read blogs, you give me a clear insight into the right and i appreciate it. maybe one day you wont be scared to send your readers here. i promise to send them back. 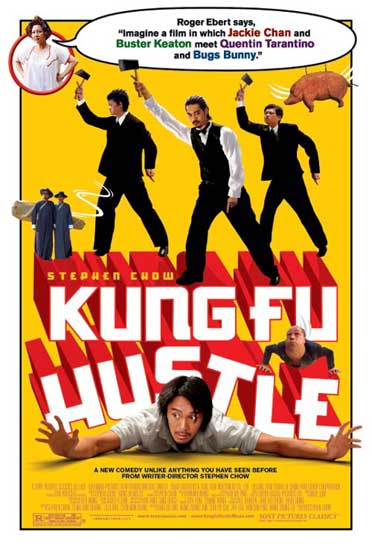 this summer ive been treated to some excellent films.

one of them i cant talk about because it hasnt come out yet, but the other one, kung fu hustle, is now available on dvd and it deserves the busblog’s highest rating.

in the same way that i wonder how much more the red state mentality can wash over america, i wonder how far movies can be stretched in its imagination, in its quickness, and in its seamlessness.

stephen chow is a creative little bastard and his vision is realized in kung fu hustle in the same way all the geniuses at Looney Tunes imagined it and saw it realized on the screen.

the thing about chow, though, is he does it with real people proving that animation is kid stuff.

for a while jackie chan was the ultimate in chinese kung fu, but in this film stephen takes that chan blend of comedy and violence to a higher level, a much higher level. the most unlikely characters will kick your ass in ways that ive never seen on screen.

there are bad guys who can do things to you that seem defenseless but just like in a video game theres a way to beat them, the only question is, can you do it before its too late.

at the root of most great films is a sense of spirituality and redemption, of goodness and honor. theres none of that in this film. until the right moment. its at that time that you realize that chow is a genius, and his filmmaking was simply the vehicle to get us all there.

the only other movie ive seen of his was shaolin soccer and although it was funny at parts, it was overthetop and i turned it off after a little while. in this film he took what he was learning and he molded it and then went wayyy over the top but it works here because it wasnt exaggeration for exaggeration sake, it was exaggeration because he had mastered his craft.

i cannot think of a negative thing to say about this film or a flaw in its design.

we are taken to another world, we are introduced to a variety of interesting and unique characters and we like them all, even the most cruel, and we are treated to some of the best duels and most ridiculous slapstick and it all makes sense.

im not so sure that chow would have been able to make this movie if films like the matrix, crouching tiger, star wars, or drunken master II hadnt preceeded it. but what he does so interestingly is take all the special effects from those films and use them for his own means as if they were new colors to his pallete.

and i love that the bad guys use the hand axe, my favorite of all weapons.