thanks for writing me so much.

youve all written so much that i feel its best if i answer you in this post.

first of all, thank you so much for reading it. i knew how i was getting about 100 hits a day, but i was always curious as to who the other 900 people were, so this explains a lot. welcome.

The United States. i live in the United States of America. im sorry that i just call it America. its a lazy american thing to do. i know that theres south america and central america and the usa is in north america, but when i write it as “america” i am sorta saying, “yes i know this is arrogant. we are arrogant. and we’re probably going to stay this way for a while.”

rock music. the cds i gave you are rock. you are hearing guitars and drums and someone yelling. what youre feeling is the bass. the purpose of rock music is to help you remember that youre a live animal. which is what we are at our core.

the best rock music is dangerous and agressive and wild and powerful. it’s also nice when it can be sensitive and subtle and insightful. but as long as it rocks it could be completely full of shit. it’s the music of the common man and the only thing that matters. next to spirituality, of course.

almost all of you asked me about either beer or cigarettes or drugs. even though we dont have fancy space machines, odds are humans are smarter than you. we just havent been around as long. one of the drawbacks to being so smart is life gets boring, so some people like to get fucked up so they can look at things with innocent eyes. other people are so smart that they outthink themselves out of doing the things they want to do, so they get drunk and let loose.

some people are just stupid.

theyre the ones who smoke cigarrettes.

but they do look cool, which is generally the point, and old age has never been marketed as being all that, so maybe these cool kids are on to something.

usually we keep our voting records private, but since so many of you asked, im going to vote for larry flynt as governor of california. at first i was going to vote for gray davis because its not right that he should have to win a second election in the middle of his term, but then i thought, fuck him. he should be bitching more and hes not so fuck him.

im voting for larry flynt for the same reason that people lie about why they say theyre going to vote for the terminator. they say arnold is a good businessman, but very few people in the world are as successful as larry flynt. hustler, the magazine he’s best known for, actually brings in just a fraction of all the monies he gets from magazine publishing. and he’s ugly, and hes crippled, and hes slightly insane, and he has set the bar for what is completely dirty. and in america, thats a tough trick.

most of the people here though are pretty nervous about how others will perceive them. they run around being a certain way so that they will have a better chance of being successful. but larry flynt has shown us that you can be the grossest frog mouthed s.o.b on the block and if you know what youre doing you can Still build a golden tower in beverly hills from all the money that you’ll end up with.

and how sweet would it be for the republicans to see that their dirty little coup resulted in hell freezing over and larry flynt ending up governor of california?

itd be enough to put the state on the map.

anyway, thanks for writing, i will answer more questions and clear more things up later.

p.s. my flying car is not for sale, and neither is chopper one. thanks though!

starring tony as the beaver.

ive decided that the reason that this blog hit an icy patch this summer was because i havent been chasing any girls. nor have i allowed any girls to chase me.

ive been super good at playing impossible to get for a while and i let my guard down for this new job and it doesnt matter what hoop they ask me to jump through ive said k and its been all good.

today someone asked me to be in a tv show. i tried to tell the nice person that im not talent but she insisted. and when the time is right i will make my way to the other side of the camera and let people like xeni and wil get the makeup applied and i will sit in the control room with my feet up and thats the way those of us who really dont want to be on tv let it happen.

and i know exactly what id do for a living.

id have a morning tv talk show for kids. we’d have two-minute cartoons the likes theyve never seen. there will be art projects and things to do on your computer and games and magic tricks, monsters, and tales of good and evil.

and kids would send in dvds of themselves telling jokes and punk’ing their grandparents, and theyd bring their pets on the air and we’d watch the pets wizz all over the stage.

my hero growing up was mr. ray rayner and the problem with deregulation is there arent really any local programming any more and if ray rayner was around today he would be selling cars because aint no way ray rayner woulda been able to do his thing because wgn isnt really wgn any more. its tribune corp. and tribune corp can lick me.

cubs won yesterday, speaking of trib corp. and i dont know about this dusty baker character. how come he can get his dudes to beat the cards 2 outta 3 but not cincy? 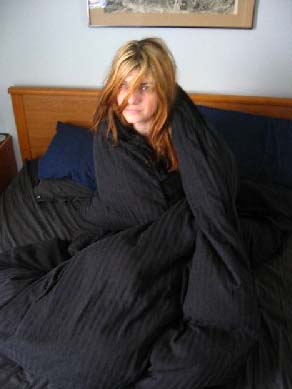 i must say that its pretty nice to see kerry wood come in in the eighth after mark prior with rick dempster closing. pretty nice indeed. but seriously wtf.

and its nice that nomah is hitting again, although if he had driven in a run i might still be in the race in this one fantasy league.

something happened to me this weekend. i was at a fancy party in malibu. i was at the biggest house ive ever been in. and the nicest. the pool was huge and the hottub was tiny. when you went inside the house they had it so you werent sure if you were inside cuz they had gardens and trees in the inside and you looked up and there was the sky and yep you were inside but you were outside.

the floor curved down when you were upstairs and the kitchen didnt have any walls. and the girls were cute and one of them had a wig on. and i wish i was making this up but im not on the pipe any more, so this is all real. and the music was techno but not bad and the sky was clear and the moon was up there sorta crescenty and it was saying hi tone, welcome back to malibu. this is where you nearly lost your virginity but you chose ventura instead. and i love you malibu and i always have. we will be together again one day.

and i look at that town the way the indians probably look at america. i dont think that anyone really deserves it except for those who have been there forever. and even though i first set foot there 21 years ago, even thats not long enough.

and a girl came up to me and asked if i had a light and i said baby you shouldnt smoke and she said you shouldnt drink. and i said how about you drink my drink and i’ll smoke your smoke and before i could see in the darkness what she was smoking she said deal and we swapped and there was a huge joint in my hand the size of a taquito.

only because im a man of my word did i light it and smoke it after i cracked open her cold beer.

and we shared the thing and the beer as she gave me a little tour of the mansion and once again i was distracted by the scenery to ask for her number but there it was, i had gone over a month without the herb and heres a few things i learned from the experience: weed still doesnt affect me much so im not going to touch the stuff for at least another month, pepperdine girls give away everything with their eyes, and perfume is truly underrated.

i had a dream about johnny rotten last night.