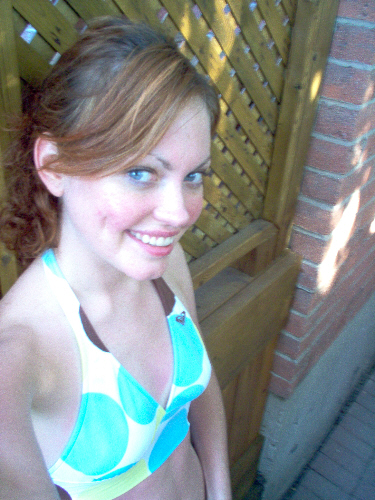 if you dont know you better axe somebody but my life is 2903742343 times different today than it is a year ago or two years ago. the biggest difference is my job my car and the girls who get naked for me. and out of that comes all the other little differences.

and then christie st. martin (pictured) chatted me up and we decided to have a podcast and it was only supposed to be fifteen minutes long but we totally hit it off so it lasted 50 minutes

and all along i was making chicken on my george forman grill so if you actually do listen to it and hear what might sound like distortion its actually chicken being foremaned.

and a year ago or even two years ago or even three years ago there would have been a hot babe waiting for me in my waterbed or watching tv on my couch but thats not the case right now. right now im attatched to no one, which is also weird for me, and youd think id be more productive but no, im running reruns on this shit and deep down i wonder if its because i just dont think i have anything to write about but deeper down i know thats not true

cuz i could write pages and pages about the republicans and how theyre the tightest sorority on greek row.

yesterday i was driving to work and i was a tad late, by a tad i mean a schmidge, so it was like 9:03am and rush limbaugh was on my new car stereo and he went into this little pompous rant about how all these mainstream media outlets had called him before the show to ask him if he was planning on talking about pat robertson’s bizzare comments on everyones favorite show The 700 Club where he said that we should assasinate Venezuelan President Hugo Chavez.

limbaugh proudly said something along the lines of “no i will not be commenting about that because You dont determine the content of this radio show, mainstream media, I DO.”

and it made me wish i was a republican because that sort of loyalty is priceless.

btw, how rush got away with keeping his job after getting caught being a druggie still blows my mind, and how he kept his ass out of jail during the same time that tommy chong did hard time for selling bongs is still intensely curious to me, but pretty much everything is.

all things that you’d think the conservative party would rally against, but no, because he put an (R) next to his name all was good in the hood

and quite a hood it is, if even blowhards like Rush who have a few hours to kill each day on the radio wont touch a church leader expressing illegal activity on the head of democratically elected sitting president, thats a brotherhood i think we all wish we could belong to.

im still waiting for guys like the instapundit to try to spin the latest harris poll that says that bush’s approval ratings are at an all-time low, infact lower than Nixon was during watergate.

but i dont control his content any more than i control rush’s.

what rush doesnt seem to understand is he’s the master of spin and this is his chance to show his stuff. glenn did the right thing yesterday and called the minister “one of the original models for the term “idiotarian,” which is accurate, but im not going to hold my breath to wait to hear him say that about our dear leader who might not be the original model of anything

but he is a dipshit

and id give my kingdom to a right wing blogger or radio talk show dude who just owned up to that one day.

but like my new cohort explained to me last night, not everyones as honest as i am

and sometimes you just have to chill out and be mellow about things.

even if we’re at war.

even if people are dying over nothing.

even if gas prices are $3 a gallon for no good reason.

and one of the nice things about rerunning posts is we get to see how times have changed and arnold was the right’s bestfriend back then and now he’s done absolutely nothing good for california and it’ll be interesting to see if he even wins the republican nomination, but he will, cuz theyre all in lockstep with each other.

be as much as they call california crazy, we dont mind voting out retards when they are proven to be bad for our state, which is nice, but its too bad that trends that start here take years to spread across the country.

all things christie + best week ever blog + my podcast with christie

im used to it.

i know that there are a handful of hecklers out there who either arent comfortable with my thousand readers a day, my dominance at the scrabble board, or my wicked crossover dribble.

they remind me that im the man.

they remind me that i am on the right path, that im doing exactly the right thing, that im typing the right way, that im saying what needs to be said.

the sweet people remind me of those things too, but not like the haters.

the sweet people make it all worth it.

actually it’s worth it without any of the people, but the sweet people make it especially worth it.

i remember all the things youve done for me.

youve sent me on vacation, youve bought me gifts off my amazon wishlist.

youve linked me on your blogs.

some of you have even come over to my house and gotten nude for me.

some were even women.

none of that shit ever happened when i wrote this in a trapper keeper.

magazines have interviewed me, ive been invited to speak in public, strangers say hello to me at the baja fresh. all cuz of this blog and how i write it.

so you dont have to tell me how to do it, fakers.

youre fakers cuz you fake at hating when all along you love.

i see you in the archives. soaking it all up. trying to hate, but cant. trying to lurk but having to say something. something dumb, but something.

you think i like saying bad things about the president of my country?

you think i like the fact that the son of a nazi is the favorite in the coup thats going on in the state that i live in? the most important state in the union?

unlike many i dont sit in my many mansions and root for the republicans to keep fucking it all up.

they just do it anyway.

and if some want to identify themselves with the son of a nazi, or a son of a bush, thats their problem.

i look at my elected officials the same way that i look at the batteries of my remote control – when they stop being effective, they get removed.

the president, the congress, and the supreme court have not been effective.

dumb is trying to show someone up in their comments, when that person writes three times a day.

david didnt get goliath by kicking him in the leg.

if you want to shut me up about politics, do it with facts and figures.

show me how bush/cheeney have made the greatest country in the world even better.

show me that im wrong about them bungling the economy, about how they lied about why they wanted to blow up iraq, and failed at finding the leaders of the evil doers, and that failure is costing us a billion a day.

and dont try to pretend it was for humanitarian reasons. fakers.

show me that they had nothing to do with the california energy crisis two summers ago, or the recent blackout on the east coast.

or just admit it all and say, so what, my daddy voted republican and i’ll vote republican till i die.

but dont tell me to go back to talking about the weather.

even if its beautiful and a mild seventy three degrees here in hollywood at midnight with a gentle breeze coming from the west at about two miles per hour.

cuz if you do, i’ll tell you to go back at doing what you do three times a day.