aka Another reason why you need some brothas in the newsroom.

earlier today i told you how i watched the news yesterday and winced when i saw my people seemingly looting in streets seas of new orleans.

i winced because as a proud young black man it hurts me whenever i see one of my brethren getting caught in stereotypically embarrassing activity – even when its happening in an impoverished part of america in the wake of an ungodly rough natural disaster.

in fact some might argue that stealing diapers and milk and bread in a flooded-out grocery store isn’t true looting because those goods would spoil or be damaged well before that market could re-open.

im not so gracious. theft is theft and i dont like to see anyone do it regardless of the situation.

but thats me, mr. vegas.

there was a great deal of looting in the last few days in the big easy, apparently, because even white people got into the act.

the problem is, for some strange reason Agence France-Presse via Yahoo! decided, through editorializing in their captions, that when Black people liberated libations from the flooded foodstores that they were looting 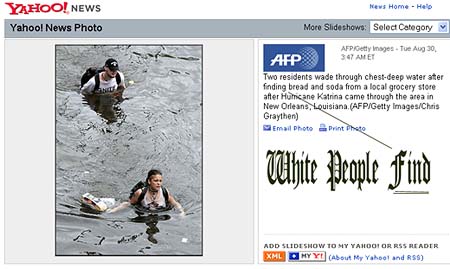 however AFP figured that when this white couple pictured on the left were caught doing the same exact bullshit they had merely “found” the merchandise.

now some may say, ah theyre French, theyre not racists. the French LOVE Black people! look how warmly they accepted our jazz musicians 40-50 years ago.

and those very same apologists might say, “perhaps ‘found’ is what you get when you translate “loot” into french and back to english”

but then how do they explain this?

so now we’re back to white people find and black people loot.

then we have the issue with Yahoo! who collects these pictures and throws them up on the web. i dont really see how theyre blameless in this apparent racism either.

yes its not their pictures or their text but they are partners with AFP and AP and the rest – are you telling me that theres no oversight whatsoever to make sure that inaccuracies and mistakes dont get distributed throughout the world?

and isn’t it an alleged looter? arent you innocent of a crime until you are proved guilty? did all their sense get hurricaned away while they were writing these captions?

what if that Black kid was sent by his father to collect everything that he could from their market before the cop-looters showed up? what, a Black man cant own a market? 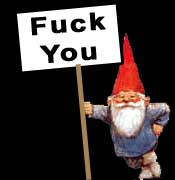 thats why the pros say alleged my friends, alleged.

i dont care if that cameraman saw that little kid kick down the door and run out of there with a garbagebag full of bubblegum and whiskey, how is that cameraman supposed to know that wasnt bought a day ago and he has a receipt? how does he know he wasnt sent by his neighbor who owns the market to get him his Tums?

a Brotha in the newsroom would ask those questions of his editor. and theyre not bad questions to ask “boss is this looting or is this taking? are we editorializing if we say loot? shouldnt i just write ‘a young man swims home with his bag full of items from the market’?”

but what i really want to know is how on Earth the white couple ended up with a caption that read that they just happened to “find” bread in the store and how that wasnt looting.

was there a sign on the store that said “take all you can find! shit we’re flooded, y’all!”

and if there was i as the editor would have asked for a picture of the sign, and if one didnt exist the caption would have included the text of the sign.

i talk a lot about the Daily Nexus at UCSB on this blog.

we wouldnt have made these mistakes and we didnt have a journalism school on campus, we didnt have any creepy adult advisors telling us what to say and what not to say, we just had a bunch of over achieving writers who loved journalism and who taught each other that to be objective is to be professional and there is always a better way to tell a story

and the best way is to be fair and true and ultimately responsible for what happens under your masthead.

AFP and Yahoo! need to apologize for this major gaffe.

and if theyre serious about their apologies they need to hire some African-Americans pronto on their editorial staffs to make sure this shit doesnt happen again.