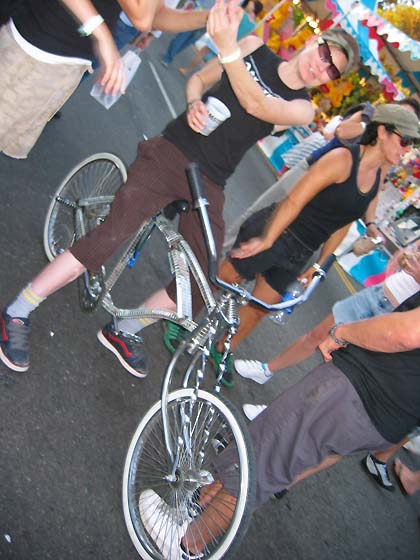 eight cuz im in a shitty mood. its one fifty two am on sunday night, so monday really and i should be in a great mood, i got to go to my favorite street fair, i got to hang out with karisa for a little while and i heard great music and when i got home there were some messages for me including one from someone who had been to the fair earlier in the day who was drunk and soaking in her pool and wanted to know if i wanted to come over.

my life is so bizarre i wish i could tell you.

instead of going over to that dramafest i stayed at home and watched puff daddy turn the mtv video awards into the bet awards and being a gentleman of african descent i didnt mind the okie doke at all.

infact the shot of the day was snoop dogg and gwen stefani posing and profiling for the kids.

although the performance of the night, suprisingly was miss kelly clarkson who didnt hit all the right notes but showed the exhuberance of what pop music should be all about.

bu mostly i sat on my couch and steamed because of something that got under my skin a day ago that i shouldnt have even let bother me but it did. i found out something about someone that had nothing to do with me, but of course i made it about me and i know the devil is for real because he sat in my ear and said shit like she never did those things with you

she did it with someone who wouldnt even get four hits if he had a blog
someone who doesnt even know who ozzie smith is let alone have his rookie card
someone whose cd collection isnt as large as yours – so large its spread across america like fine art.

someone who isnt coming out with a new collection of poems and stories any day now.

that devil whispered so quietly in my ear that for the first day i didnt even hear him.

i woke up pissed off this morning and i didnt know why, i thought it was a new neighbor who took up after the old neighbor and went outside early sunday morning to smoke and talk on the phone as if no one could hear her, as if no one would have their window open on such a warm weekend, as if everyone wanted to hear her phone conversation early in the morn.

i just need to let go. emptiness the buddhists call it, let the water out of the pitcher and you’ll be free. dont hold on to stale memories and dreams that will never come true. quit comparing yourself to whiteboys with no soul, or to fakers with no heart. people make bad decisions all the time. i make bad decisions all the time that could hurt peoples feelings but its not intentional, its what you do.

you cant eat beefaroni every day

sometimes you have to hit the road less traveled.

my times up but i have a few more things to tell myself to hold up. tony youre never going to get out of this rut unless you keep on letting new things happen and quit holding out for something from the past to catch up with you. no way. havent the teenage girls taught you anything. or the cheerleaders or the lack of weed or the lack of greed. let the winds blow and go that way. quit trying to fear the reaper.

best time you ever had while traveling was waking up going to the train station and riding the next train whereever it was going.

youre not so smart that you know the future

and the best way to kill satan is to enjoy today.

i had chicken on a stick today and it was fuckin awesome.