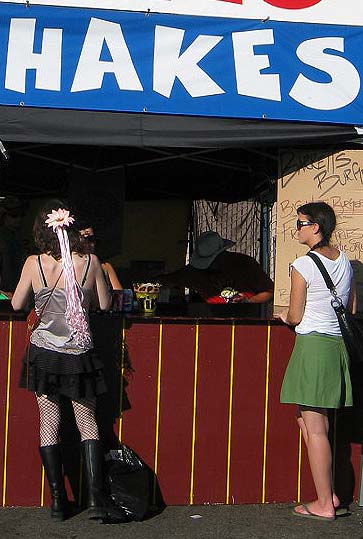 that unless people are holding onto telephone poles horizontally im not at all interested in the weather.

so last night i watched a little bit from the weather channel. more than i expected.

ive been to new orleans before. ive been to the South before. as great as the French Quarter is/was, some of the outskirts were not so great. infact ive never seen any poverty like that in a long time.

so of course when i saw the looting that followed the terrible hurricane i winced because i never like to see my people outright thieving, but when the reporter said that people were stealing diapers and food i was all, see SEE!

but because nobody was watching tv with me the dustbunnies made like tumbleweeds and followed the breeze a little further away from me.

maybe i dont care about the weather because theres so very little that i can do about it so why bother, and why talk about it. talk till youre blue in the face its still not going to change anything.

the only thing that could have changed were the evacuation proceedures. like they could have said it would be illegal to be caught on top of your roof, or on top of your neighbors roof if the floods came. but i guess thats pretty harsh when the poor mans house was being flooded.

ok so there probably isnt anything that you can do about the people. if the people want to try to hide out in their houses, i guess you pretty much have to let them, but you can change the coverage.

if i ran msnbc or cnn i would have the no-anchor disaster coverage. just the video and a variety of music.

if its storming there would be metal. slayer, iron maiden, judas priest, all the faves. if my people are caught looting, i guess you’ll have to throw on some n.w.a or ice cube. it breaks my heart, but what can you do. if you want to show standing water after the storm maybe some cool jazz, but you know id be booming the tom waits rain dogs while the weather doppler 8000 was rolling.

i was impressed cuz no way would i have charged them anything.

unless they had said something dumb like cindy sheehan is just a left wing tool or were wearing yankee hats.