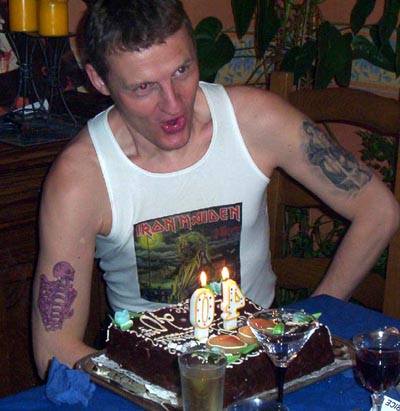 and its cute. if i wasnt me id probably be jealous of me too. especially if i was a maddox (pictured) wannabe who loved coldplay and starbucks and lived in frisco ten years too late.

or a guy who knows nothing about making a decent blog so he changed his name to mirror mine so as to try to gank some of my google hits – he has subsequently quit blogging (after posting an ironic last post), which is definately not the way i’d wanna go out.

but because i am me i know a thousand reasons not to be jealous of me so this morning i will give you one of them: the hell i go through to buy things.

yesterday it took me like an hour and a half to buy new sneakers. it took that long because for some reason buying shoes is the most political activity i ever find myself involved in. even moreso than voting for president, because at least with elections i pretty much vote for who i like.

the problem with buying shoes is, nike has the best designs but no way in hell would i ever buy their shoes because they use third world sweatshops and then charge the highest price for their shoes.

im all for a free market but i dont think that its right to be a part of the greed cycle.

nike doesnt need to exploit third world countries to remain competitive in the market. they could very easilly either pay their third world employees a reasonable wage AND charge $100 for jordans, or they could move their factories back to the usa and charge $125 for jordans.

but to exploit AND charge the highest price i feel is disgusting and im always surprised when i see politically correct millionaires who should know better, like, say, jennifer anniston, sporting nikes.

after the tibetan freedom concert that i attended in sf’s polo fields i was pretty much convinced not to buy shoes made in china either. this has been increasingly tough because my favorite brand, converse was recently bought by nike making them off limits to me AND they are now made in china.

hell, pretty much every shoe is made in china these days.

because i have no fashion sense, i wear the same pair of sneakers every damn day. and because of my finicky political stance about shoes, ive been the proud owner of some (relatively) expensive pumas for the last two years. i dont mind paying double the going rate for shoes though because i get my moneys worth. i paid about $75 for my kicks two years ago which means i paid about $37/year or $3 a month. thats like seventy five cents a week for my most imporant accessory.

so yesterday for some reason i just felt like driving. it was gorgeous after work and i had my window down and it was warm and i had just filled up my car with gas and you know how good your car drives for some reason with a full tank… so i just kept driving east. in echo park i remembered there was a Shoe Outlet of some sort.

it was an irritating store whose banda music kept clicking on and off because their radio was on its last legs and i even told the pimply faced dude that unless he threw the radio out the window or put in a cd i would kill everyone in the store. the security guard raised an eyebrow so i turned to him and said, do i have a point bro? and he nodded and chilled. a snoop dogg cd was popped in and i was able to try to figure out my new shoe situation in peace.

the store had seven rows of sneakers for men. three were nikes. i tried not to look, but its impossible. they make great shoes. and the jordans were incredible. then i wandered the rows looking for non-gay sneakers. their puma selection was horrible and their clearance section didnt really have any 10 1/2s. there was a pair of cons that i really liked but what could i do, so i kept moving on.

way in the back were some DC skate shoes. they werent made in china or indonesia. some were made in vietnam. i wasnt sure what to think about that. but some were made in mexico because this store was incredibly shady. i could live with mexican gray market skate shoes, so i tried a pair on but they had this gayass velcro top thing where you would normally tie your laces.

i tried them on and they fit right, they were black with red lettering and a little bit of white which looked like sorta old school chicago bulls, so i bought them for $60 and felt good.

then i saw they were selling basketballs and i had recently found some basketball courts that nobody used because it was in the center of gangland. because i am no one to truly be jealous of, im not afraid to die since i have nothing to lose, so when i saw those basketballs i was all “thats how you can get rid of those extra ten pounds around the waistline”.

there were twelve basketballs. eight were nike. all eight were spectacular. my favorite was an old aba red white and blue one. so that meant i had four spaldings to choose from. two of them looked like normal basketballs. one was painted purple and gold like the lakers and one of them looked like it had been splashed around in standing water for a week. since i knew the gangmembers would probably try to challenge me to some one-on-one and the loser had to give up his ball, i chose the old-lookin one.

because someone was going to be shot

and i didnt want the blood to stand out on my new basketball.