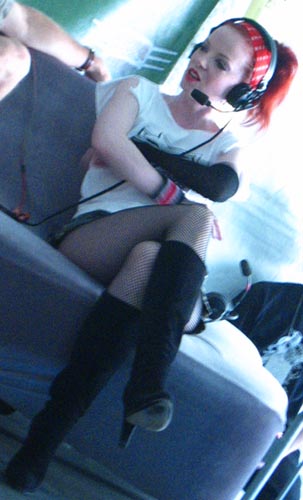 and i still havent written my 600 words for the weekly. i never procrastinate. i always knock that shit out.

its not due till tomorrow afternoon but some of us work and i will have no time to do it there so all i gotta do is squeeze all of what i wrote down there into six hundred words which is why i thank the Lord above that he whispered in my ear to major in poetry cuz a poet can make anything short.

i think theres nothing that fool has over me. he has one thing, hes got a motorcycle. thats it. i could have a motorcycle. anyone could. black man could have two motorcylces, it wouldnt matter. we’d have to have three.

letter have her whiteboys my good angel says. its like how this country votes republican. they do it because they feel like theyre almost supposed to but when its over they always feel so fucking gross and they run around thinking that it was them who did something wrong, not the whiteboy. bitch it was both of you! stop it.

i went to the show yesterday with a very sweet girl. twenty years old. why are all the sweet girls nineteen and twenty years old. i was all are you hungry she was all i never get hungry. i was like want something to drink and she was all i never get thirsty. i got her food and drink anyways. licorice and water is all shed accept. she took the licorice and made a straw out of it and sucked up the water and you tell me, why should i hang out with anyone older than twentyone after that shit.

six hundred words. i can do six hundred words standing on my head. the problem is i really wanted spending today on the final edit of stiff. i wanted to add a few more poems and throw in two newspaper columns from the nexus cuz the poems were written around the same time. this book is never coming out. i hope you know that.

i dont know if i ever told you but i saw the 50 cent movie the other day. it wont come out for a little while but when it does it’ll win an academy award. thats how good it is. but im not supposed to talk about it.

one of my favorite bands from the isla vista days, the sean white band, put their stuff online and i downloaded some of it and its great. thanks jamie.

have i procrastinated enough? its so silly cuz ususally the only time i procrastinate writing something is when i either a)dont know how to start it or b)have waaay too much to say.

i totally know how im gonna start it, im going to say that someone put something in rivers’ juice box and he went nuts on stage thinking he was angus young.

and i dont have waaay too much to say. i just have too much time to say it.

once a week you should learn something about me.

clinton finally shows a pair + hackoff.com, a blook + a blook from kids – too adorable