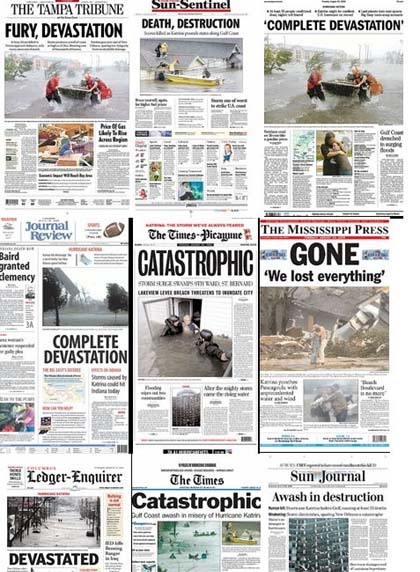 in fact one could say that the older you get the more you get used to lies and the lying liars.

“i’ll call you right back.”

but the other day, in the midst of the worst national disaster in the history of our country a bunch of high ranking officials lied right through their teeth and the president didnt call bullshit, the press didnt call bullshit, not even the worlds most popular blogger the instapundit called bullshit

and their lack of bullshit calling sorta makes you think that maybe they were all in on it or dont want to talk about it, but since i dont believe in conspiracy theories i’ll pretend that they were all too busy donating to the red cross or something.

anyway here was the lie: on Sunday morning when everyone was at church the chief of Homeland Security told Tim Russert on Meet The Press that the reason that the feds were so slow to rush to New Orleans was because of what he had read in the papers “I remember on Tuesday morning picking up newspapers and I saw headlines, ‘New Orleans Dodged The Bullet.'”

First of all, does Homeland Security decide how it’s going to handle its affairs not by what it sees on CNN, the Weather Channel, or a variety of newschannels – but waits for the paper to come out? And doesnt it have, oh I dont know, PEOPLE that it could talk to who are, you know, in the effected areas?

But more importantly, what fucking paper did Chertoff read? as Wonkette pointed out the other day, here are the headlines that morning from the Washington Post, the New York Times, the Washington Times, and the New Orleans Times-Picayune.

in fact thanks to the wonders of the interweb theres even a website that archives a huge number of newspaper covers every day.

for example, here is page of todays headlines

no headline that screams New Orleans Dodged The Bullet.

in fact there are 477 newspapers archived on that day. none that say what he says they said.

ok that wouldnt be such a big deal if General Richard Myers hadn’t said almost exactly the same thing two days ago, Tuesday, in a press conference with Donald Rumsfield

The headline, of course, in most of the country’s papers on Tuesday were ‘New Orleans dodged a bullet,’ or words to that effect. At that time, when those words were in our minds, we started working issues before we were asked.

wait, what? so you read these mysterious papers that said all was well and with those words in your feeble little minds you started working on issues?

what fucking issues? either you read a paper that said everything was chill and you chilled or you really read the papers and knew that shit was fucked. but dont lie to us and say that most of the nation’s papers said things were chilled, General, because any dipwad with even basic cable knew it wasnt and anyone who was reading anything other than the Weekly World News knew that the Gulf Coast was toast.

and when that rock was pulled up we have seen all the slime and much and dreck that wiggles in there.

and now he says, we are seeing the right wing bloggers and red state supporters defend this adminstration as they drop the ball and lie and lie and lie.

the rock has indeed been lifted my friends, and not even the investigation that the president yesterday proposed that he will launch on himself (which now, thankfully will be bi-partisan) will help him dodge this bullet.

new orleans was devistated with a one-two punch indeed. first nature nailed it, and then this administration sat on its hands for five days and watched people drown and starve and suffer and kill each other.

ive lived through many miserable times in my life, but the more this tragedy sinks in and the more rock gets pulled away the sicker i get inside, and i dont even care that people think this is a political blog, which we all know it isnt.

this is a pissed off blog thats only getting pissier and if youre not mad as hell youre not paying attention.