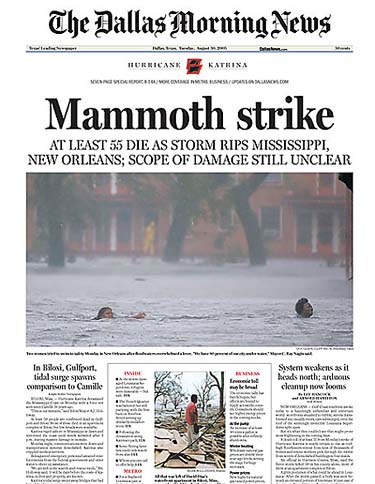 scott: And we’d have a super-raging, red-hot volcanic debate over posse comitatus. Ten times worse than this petty BS finger-pointing right now. THAT would be an impeachable offense, even if BushCo manned a human chain and held the levees and saved every lost life in NOLA. Congress would be FORCED to impeach him.

let me tell you a few things about being a leader.

a leader saves peoples lives and worries about his job later.

a leader cuts his vacation short when he sees that people of his nation are drowning and help is not in the way.

a leader is that help on the way.

the busblog definition of a leader is someone who brings the group to where they need to be.

george bush has never cared about being impeached, and the democrats dont have enough chutzpah to even try to impeach him.

bush and his bros challenged the ideas of torture in relation to the geneva conventions and the bro who questioned it the most might be our next supreme court justice. and yes, death and torture did happen in the prisons of iraq and gitmo and the president isnt in danger of being impeached.

so this limp defense of the president’s inactions in new orleans last week that omg if he brought help or overstepped his bounds by saving lives might get him impeached is laughable to the point of being sad.

where BushCo is ruthless and selfish and hopeless and inept, the dems are pussy and silent and weak and timid and worthless.

and the losers of this slamdance of fucktards are americans and iraqis.

a real leader, a real president of the united states, whose number one concern was not his ass or his politics but his people would have flown to new orleans the day that he saw people floating in the water and brought the calvary.

everyone knows that where the president goes, the heat comes with.

yes sometimes shit stops when the president is around but thats because the president is a idiot and a pussy and inept. and those who vote for him repeatedly and support him are part of the problem, if not THE problem, but this isnt about them. today is about him.

paris hilton is more of a leader than george bush.

i talk about the Daily Nexus a lot, my college paper. i ran for Editor-in-Chief my senior year and lost, but during the final portion we had to have an interview with the Press Council which were 5 members of various student organizations and the administration.

at one point they asked “what would you do if your staff wanted to do one thing, but you wanted to do the opposite?”

i said, “i would ask them to explain to me why they wanted to do it, and i would tell them that i would consider their idea, but if i felt that mine was better, i would lead us that way.”

i lost by one vote, 2-3, but i would say exactly the same thing again, because i still believe it.

the president’s job security is not more important than the lives and well being of those sufferring and dying in new orleans.

the lack of preparedness, the absense of government funding, the slow-as-molasses “resuce” effort, and the bungling of FEMA and the department of homeland security, and the horrendous lies by the president that brownie did a heck of a job and that the newspapers on tuesday said that new orleans dodged a bullet caused as many deaths as five 9/11s.

it caused as many deaths as five iraq wars.

in order to get re-elected he continued to cut taxes during wartime and part of the monies that werent collected were supposed to go to the levees and the flood plains and the result was five 9/11s.

at some point the leader takes responsibility for what happened on his watch, be it something he did directly like lead us into a false war, cut taxes for programs that would have saved lives, or played it safe and not immediately aid the devistation of one of his cities.

at some point the followers call bullshit on the leader.

this is that point.

im sick of not having a leader.

im sick of this figurehead never taking responsibility for anything.

im sick of this administration only being punk rock when it has to do with denying things to gays and women and our military and political prisoners and those in disaster areas screaming out for help.

the american people are the ones who need to stop acting like the democratic party and sit on thier hands and watch this government splooge on themselves as they fuck up time after time.

new orleans was a fuck up from the ground up. and at some point the president needed to say ok im taking over for a minute because i am seeing that this red tape is strangling people. impeach my ass later but now im gonna show you how its done.

but we dont have a leader in america

although we have plenty of sheep

people are dead and others worry about finger pointing?