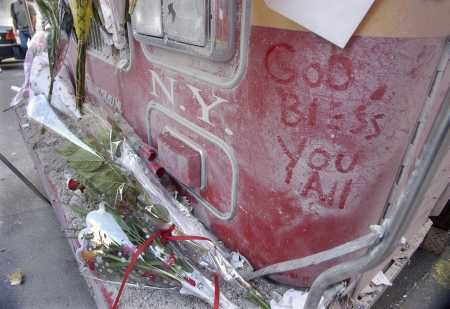 it tends to lean heavilly Left, but they’re concious about it and try to be as fair as possible, and what i like most about it is people fact-check each other like crazy because the purpose of the discussion(s) is to get to some truth based on fact – not political agenda.

for example the other day when the Washington Post ran a story accusing BushCo of blackmailing the LA Governor into handing New Orleans over to the Feds, a thread was created to discuss the story and within six hours it was deleted and marked “This post was deleted for the following reason: crazy speculation with a source, but no support for crackpot theory”.

its that sort of logical self-policing that keeps the discussions on-target (for the most part) and keeps me reading, and sometimes contributing.

their influence is all over the busblog and today is no different.

i registered for Metafilter four years and a week ago. their 9/11 thread four years ago was and is a great record of that tragic day.

today someone posted a “highlight” of the hundreds of comments which i respectfully paste here. but as the good professor says, read the whole thing.

btw, for the purposes of transparency, a cornerstone of good blogging, yes i am tsarfan

looks like the top 20 or so stories of both buildings. the base of the buildings should be ok, asboth buildings are designed for massive disruptions simliar to this….
posted by mich9139 at 6:36 AM PST on September 11

Some sort of bombing at the pentagon just occured.
posted by donkeymon at 6:45 AM PST on September 11

This is going to be a big turning point in the history and character of this country, I think.
posted by Doug at 6:51 AM PST on September 11

Oh, man… I am so sick. This is the day everything changed. I was just there the day before yesterday, the World Trade Center.

There are so many people there….
posted by anildash at 6:52 AM PST on September 11

c-span is training their live cam on the capitol, waiting for the next hijacked plane to hit it.
posted by mich9139 at 7:38 AM PST on September 11

It is my hope that everyone will now carefully watch our politicians. Those who invest in the war machine and military of this nation, which many people have in their invest portfolios, now stand to make millions to billions on the fear and anger caused by this event. So, don’t think that everyone is unhappy about this.
posted by memorydream at 10:44 AM PST on September 11

Numb. I’m just completely numb.
posted by mathowie at 10:51 AM PST on September 11

People in the streets are screaming at Arabs near me. Its absurd, and horrible. One woman, “Are you happy with what you’ve done?” Another man, “It’s going down soon, man.”
I have a friend who claims the ash I’m breathing is asbestos. Internal memo at ABC News.
posted by Doug at 12:29 PM PST on September 11

I just saw #7 collapse on MSNBC… it is so scary. Is it actually over, or is there more to come?
posted by owillis at 2:27 PM PST on September 11

The US must not stoop to the level of the terrorists, it must identify the culprits and then work with it’s allies to bring these people to justice.
posted by johnny novak at 3:30 PM PST on September 11

“I hope I live. I hope I live.” That amateur video on CNN was horrifying.
posted by gleuschk at 3:45 PM PST on September 11

It will be hard to sleep tonight. After the roller coaster I had with where the hell my dad was, with my in-laws, and everything else, and practically crying on the way home to get my son from day care, this is just too much. I would wish that this would all go away when I wake up. Shit is going to change. My dad already is saying that the markets are going to be fucked. This is definitely a changing point in our history to a degree that we can not even imagine yet.
posted by adampsyche at 5:49 PM PST on September 11

First time post, long time reader. I just want to say that the people of NYC really came together for this tragedy. I was out and about walking around with my camera and the way people were treating each other was like a brother or sister. It was amazing watching the number of cars pulled over with their radios on news stations that people gathered around or the water stations set up around the city. I feel as though today proved why New York is the greatest city.
posted by spudworks at 6:07 PM PST on September 11

Wild eyes, box knives, retractable razor blades, sky terror, toy planes crashing into toy buildings, but they aren’t toys, and the explosions are real and surreal, and it’s an unholy peek into a nighmare damnation, and the rain is shards of glass and bone, all to dust…

Beyond comprehension. I wanna go home. I wanna go splash in the inflatable pool painted with the starfish and the seahorsies that my father blew up one purple-faced breath at a time, that he set up in our unfenced backyard where all the neighbor kids came to play.

osama is being forgotten, just as i predicted four years ago + three years ago on the busblog