rock and roll is the combination of black music and white music.

all great white music comes from hank sr. except for jazz which comes from the blacks.

and dont even start with what about classical because classical is simply the absence of both hank and black music, which is why it works so well in cartoons.

nobody has ever written as simply and as clearly and as heartbreakingly perfectly as hank williams, except for whoever wrote those famous great lines in Genesis (the book, not the band).

hemingway came close but when he realized he had never written anything as concise and as tight as “im so lonesome i could cry” he put a gun in his mouth and squeezed the trigger. rightfully. which is why im secretly an nra member.

bob dylan tried to write like hank but when he saw how hard it was he said fuckit and wrote completely the opposite. it appears to have worked out for him.

if the government wasnt so full of liars buttpirates and visonless fratboys hank williams’ face would have been on the $2 bill a long time ago, but you people keep electing idiots

who you refuse to shoot when the truth is revealed.

your problem is youre soft, something todays birthday boy never was.

constantly in pain, constantly drunk, hunched over and sallow even on a good day he was kurt cobain before seattle was even named.

he hated being on time, he hated his bald head, he hated who he was, and most of all he hated a full glass of booze. 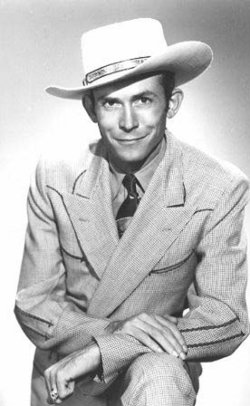 born in alabama on this date in 1923, he hated his given name Hiram so much that he begged to be called Shaquille but settled for Hank.

and just like you’d expect this poor little shoeshine boy didnt learn his trade from school or video tapes, he learned about music from a black man. in hank’s case it was a street bluesman named Rufus Payne, aka “Tee-Tot”. lookit up.

when he was sixteen hank quit school cuz even an ignorant whiteboy knew that you couldnt learn shit from some alabama public school in 1939. a few years later he was packing them into bars and juke joints. by the time he was 21 he was married and the next year he was signed to MGM and the year after that he had recorded his third hit “move it on over”.

oddly by 1948 at the ripe old age of 25 many considered hank washed up even though he was a regular on the popular radio show The Louisiana Hayride, but in early ’49 country music’s greatest songwriter released a cover of rex griffin’s “lovesick blues”, a track hank only recorded twice in the studio (one for backup) and forgot about.

but just like most great rock n roll stories, that little song spent four months at number one. and legend has it that when he performed it at the grand old opry he earned six encores. washed up my ass, hank sneered.

that year hank jr was born whose only real claim to fame is that are you ready for some football song. pffft.

despite hank srs great success and the string of hits that followed lovesick blues – in ’49 alone he had seven hits including wedding bells, mind your own business, and my bucket’s got a hole in it – and despite divorcing his first wife and marrying a very young woman named billie jean at the sold out new orleans municipal auditorium, hank was never able to defeat his demons or cure his pain.

in ’52 as rock was just a glimmer in it’s drunken uncle’s eye hank cheated on billie jean and sired a daughter named jett who would be born january 6, 1953.

however on new years day ’53 in knoxville tennessee hank williams shot up with both b12 and morphine, hopped in a rented cadillac, and sipped whiskey while driving all night to oak hill west virginia where he pulled over at a gas station and fell asleep. he never woke up. he was 29.

legend has it that his funeral in alabama was the largest ever held in that state, even to this day.

but only hank iii is worth a shit.

if you like music or american history you’ll get any of hank’s greatest hits.

if you love music you’ll get polygram’s 3-cd box set but i promise you that if you try to listen to more than one cd at one sitting you will get so depressed that you’ll want to get in a cadillac and drive to west virginia with a bottle of jack too.

“i’m so lonesome i could cry”

Did you ever see a robin weep
When leaves begin to die?
Like me he’s lost the will to live
I’m so lonesome I could cry