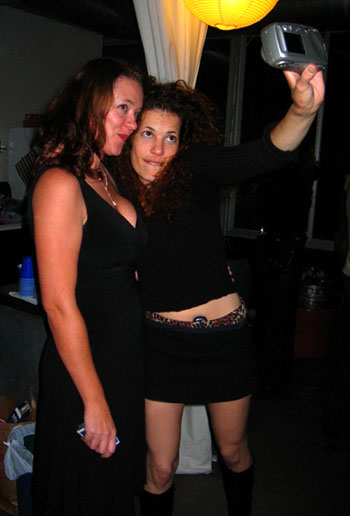 gotta thank mc brown for that one. the thing was we were super afraid that too many people would show up.

i dont like throwing parties. little known fact. ironic since im gonna be doing a lot of that with buzznet for a while. but when you throw a party youre either worrying that nobodys gonna show up or too many people were gonna show up.

we wrote to a selective but active amount of buzznet users in LA because we wanted to thank them and bring them together since buzznet is, after all, a community, and a social one. but we also emailed a lot of our friends, some of my former coworkers, crazy ass kogonauts at blogging.la put it on the web, and i handled all the rsvps and i got a ton of rsvps.

so we were nervous. when marc picked me up i ate three tums and two asprin. we got a keg at albertsons and when we got ice i was all, hmmmm, is that enough ice?

marc had already gotten a bunch of booze and chips and crackers and cheeze and i had made a playlist of music for my ipod. tons of weezer and acdc and tsar and jesus and mary chain wilco the clash tom waits elvis costello i knew marc would have the crunk so therefore we had a party.

when we got there we rearranged alot of the furniture and he had tons of candles cuz hes a stud and then he had to get his girl which was fine with me cuz my stomach was hurting so a few minutes alone on the throne with my thoughts were perfect.

emptiness the buddhists call it.

anyways it turned out fine. we had just enough people that it wasnt overwhelming and it wasnt dull and there werent too many randoms who youd have to keep an eye on. lots of hot girls showed up which was nice. the fellas were all gentlemen and chill so that was nice. someone brought some weed but im straightedge so i just stuck to the left hand cup of straight rum and right hand cup of coke classic.

i met some very nice people who i hadnt met before. in fact i cant think of one person there who i didnt like.

lets try to think of the worst person there. 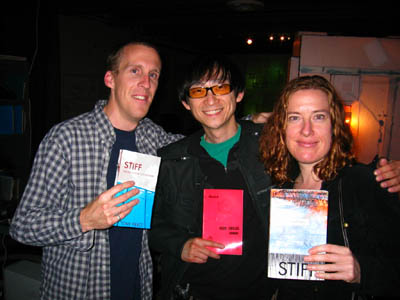 jeanine stuck her tounge out at all the pictures but she had the shortest skirt and the tallest boots so she actually wins a prize, so not her.

mr science blog left without saying goodbye but he looked pretty tired for some reason as soon as he got there. he laid his head on the couch real tiredlike so i cant really blame him. and hes the man.

hmmmm. maybe i was the worst person there cuz i made people listen to for those about to rock and evil walks and nelly with justin timberlake.

yeah, i win. plus i had a hard time tapping the keg and sprayed the first parts of sam adams everywhere.

so i think the next buzznet party we should do something like have to talk to a stranger for two songs of the ipod. maybe i’ll ring a bell first. it is a party after all, its the perfect time to meet people, and we’re all shy and nervous deep down. the next one i have a pretty good feeling is going to be in canada.

id also like to have one in phoenix soon because from all accounts alecia knows how to party and thats interesting. but we also have a pretty good group of buzznetters down there.

people gave me gifts. i thank you for those. i got season one and two of the office. i got the suicide girls dvd. dan from tsar gave me a beer bottle opener that says things when you use it. someone gave me two joints which was pretty cool. the girls from look look got me some chocolate tools. i got two very nice birthday kisses. matt welch got me california editor the autobiography of thomas storke. emmanuelle got me that patriotic italian dude who sings neo-con usa usa songs like bon jovi and team america funny as hell.

zona boy got me an autographed ernie banks national league baseball for crying out loud. 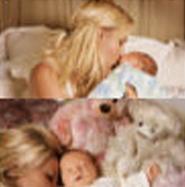 even saw the lights of the goodyear blimp and it read, “ice cube’s a pimp”

everyone who wished me happy birthday in the comments of this blog and in email and on my buzznet page, and everyone who gave me booze, thank you.

afterwards chris drove me home but first we stopped by the original tommys burger on rampart. it might be the second one. who knows. all i know is i got a cheezeburger mustard and mayo only. and ketchup. all i know is i got some fries with that shit too and i know i woke up this morning on the couch with the tv still on and george stephanopolis saying some nonsense. what do kids think when theyre forced to see stephanapolis talk to george will? they must think its saturday and cartoons are on.

woke up smelling that chiliburger and listening to george and realising i was still in my shirt from last night and i got up and got some juice and ate tootsie rolls which im still eating tonight and i thought about those joints but i must really have kicked the habit cuz i hadnt thought of them again until just now.

i think something happened in the world series today but im not sure since the raiders and the bears both won, which means anything was possible today.