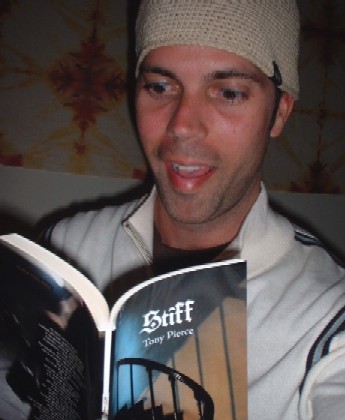 hi baby. glad to see you come and go. what an amazing week. what a week i didnt expect cuz everything pretty much went almost exactly the way i thought it would go and then some.

i got to fall in love with new york which for some reason is something that i never conceived since i was completely satisfied with la and hollywood and west coast livin.

i got to see truly how phoney the pacific is cuz the atlantic was amazingly really-real. its hard to describe unless you live it, but for some reason i let the fakeness pass here because its like smog it only bothers you if you think about it. how can i make it sink in that everyone was nice to me in new york even the cabbies who didnt wanna take me to brooklyn. how can i just turn my back on that.

the only thing i didnt like were the lack of mets hats. i saw a hundred different types of yankee caps, on all types of people from little old ladies to babies to men and boys of all sorts. i saw that ny on the back of cars in windows on shoe laces, i saw them in all places. if i got stuck in a prison camp in china i still wouldnt ever pull for the bombers i dont care how much they torture me. and its more than steinbrenner its a-rod cheating its the shit they give torre its the comeback of giambi its the fact that when they pan the fans in the stands you see eyes so big like theyve never won it before. its baseball crack.

with that said my favorite picture that i put on buzznet was this one in the window of a brooklyn dry cleaner of the 79 bronx zoo with a sweet pic of thurmon munson who everyone says kirby puckett was the last real baseball player, but id have to give it up to the yankee catcher who died in a plane crash.

and of course pete rose.

oh first week at buzznet you know i havent really slept. its 8:04am ive been awake for an hour and a half. im listening to maiden. im reading people talk shit about me and you know what, good. bono said in a recent interview that the difference between success in the usa from ireland is that in the usa we will see a big house on a hill the americans will sigh and say ah wouldnt that be nice to live up there one day, whereas in ireland they say im gonna beat the shit outta that motherfucker one day.

come and get me bitches for your whining and jealousy only keep you down.

i love how people are cracking up about Stuff on My Cat beating me. im cracking up about it too. when i finally get some free time i wanna put some pictures of that fucking page up here. yes its nice to get a reality check once in a while, however to that german dude whose also beating me who asked in my comments why im upset that a dude who only posts every three days is higher than me in the feedster 500, its because sure its quality over quantity, and i dont know german but im pretty sure youre not knocking out poetry. im pretty sure youre not feeding the masses the good shit every three days.

if i had a girlfriend right now shed be getting it good twice a day if not more. and if i took a day off shed be right to say wtf negro. and id say oh but isnt it quality not quanity and shed be right to elbow me in the eye. thats how we roll in the usa my friend. its quality And quantity which is why i might have to put out another book before Christmas just to show you whats up.

speaking of blooks. todays the day that my boss is gonna give me an hour off to send out all the autographed books that everyone paid me directly for. these are the autographed ones. and let me tell you that im totally sorry that its taken so long to get these out. like i said way back when, i went to ny, we got back the other night and the very next day i had to start my first day at the buzznet offices and i really couldnt say, uh can i have an hour to do my own personal shit? so im doing it today.

police and theives, pictured above got his copy through cafe press, miss ann ferris got hers during my trip and she said she read the whole thing in one day and loved it. if anyone else has positive reviews just email them to me or send in a picture of you reading my lil masterpiece and i will throw it up on the bloggy blog.

its 8:15am now and ozzy is singing killer of giants for me which is appropos because at buzznet we’re taking on some tough competition but its very fun to pretend that we’re Google during the peak of Yahoo, lurking in the shadows trying to figure out how to do things smarter faster better and cleaner.

one way is to have a stronger community which the busblog has been pretty good about and buzznet has been good at too. if youre in LA and you wanna go to the buzznet party tomorrow night drop me a line and i’ll give you the address.

but before i leave for the shower, let me tell you a little something about the month of libra which only has one day left in it, tomorrow. its a great month. its about love, not sex. and the epitome of this month is not so much the lovefest that went down when buzznet took manhattan but when weezer went on howard stern on monday.

now ive been lucky enough to get pretty close to weezer and ive seen a ton of their shows and i was invited to the gig tonight in santa barbara but i Have to sleep tonight because tomorrow morning i have a yahoo fantasy draft and then theres the big bash, but rivers is as shy as any person ive ever met.

that fucker got on howard stern and you could just tell how much he loves and respects the king of all media. and howard probably was told how nervous rivers can get so he took it easy on him on one level, but immediately he asked rivers about being celebate for the last two years and rivers answered right back and admitted it and talked about it and was the most confident that ive ever heard him ever. it was like he was talking to his hero, which maybe he was. and being a fan he knew that howard would latch on to anything sexual so after the band played Beverly Hills in the studio not a second passed before howard said, “wow, nice job, not even oral sex youre having with that sound.”

what was also nice was rivers did almost all of the talking, something i havent seen him do on mtv or anywhere, normally the other dudes do the talking and rivers hides out in the back and looks at his hands. but in this interview he answered pretty much everything, talked about the ups and downs of pinkerton and about the money they make and the fact that when he went to harvard after pinkerton he lived in the dorms for a while and loved it (he said he liked to be part of the community, and the availabilty of the dorm food) and how hes gonna go back there to finish his studies and live in the dorms again.

to me this could have only happened this sweetly in the month of libra. normally a very sweet, loving, soft, creative month.

i gotta say though, i never knew why rivers’s guitar playing was so good and why he seemed so intense at the kroq deal at the end of the summer, but if it was because of lack of sex then thats pretty amazing.