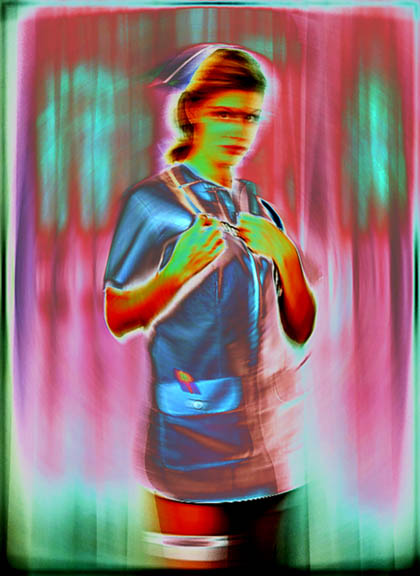 only the fool is king. ask puffy, ask korn, ask flava flav. the wind might howl, kicking up plastic grocery bags that once served mankind, but now only dance with the forgotten sports page in front of an east hollywood titty bar advertised to neighbors as Cherry’s but known to the undercover miscreant as home.

her name was lola, she was a show girl. see thru high heels up to there and blonde streaks all through her hair.

tony sat at the bar. alone.

normally the ladies’ favorite with a joke and a laugh and a welcoming lap, this afternoon he mindlessly stirred his rum punch with the tiny plastic flamingo and stared through his fake glasses and followed the trail of condensation down the dirty glass, down the curvy side, down into the puddle at the base slowly soaked up by the generic napkin that had the word “napkin” imprinted in cursive.

napkin tony thought to himself. napkin. what sort of name was that, what did it mean. where did it come from. latin?

lola lifted her g-string and released the hard earned dollar bills and counted them one by one. organizing them by denomination, lining them up neatly on the bar, folding them and rubberbanding them and placing them finally into the tiger print mini purse that hung close to her heel.

buy you a drink, stranger? she asked tony and winked at him.

he didnt even look up. just bit his bottom lip and traced his finger on the glass.

disco lights gave the illusion of motion on the ice that melted in the tumbler as kid rocks american badass blared in the nearly empty club. women’s pro beach volleyball, muted, gave color to the unwatched zenith big screens as the ceiling fans twirled lazily and rosalita slapped the first hand away from her cooch.

lola leaned over and put her heavily made up face on the xbi agent’s shoulder and tried to see the world from her hero’s perspective. what fascinating mystery was buried in the alcoholic refreshment she wondered, what was visually more interesting than a dozen latinas, four asian cuties, three barely legal blondes, and the nastiest black girl and her micromini catholic girl skirt as they all waited for the whistle to blow and for the construction to stop and for the party to get started proper.

he thought about baseball. specifically the looming strike. motely crue’s girls girls girls signaled the end of the round of two-for-one lap dances and lola spun around in her stool and scouted out the gentlemen to see who she would choose to enjoy her dancing next.

tony sipped from the skinny straw and lola whispered that she had a line of crystal meth if he wanted it and he told his napkin no thanks.

and she tapped her feet to the disco beat and the ladies of the house said ho.

finally the sadness was broken up when the bubbly korean teen called lei gently pulled back tony’s tshirt collar and dragged her tongue stud across his exposed collar bone up the base of his neck around his ear lobe and behind his head sending shivers and awakening the giant within.

there was an unusual silence.

and then the familiar three swats of a high hat

of ac/dc’s back in black.

and indeed he was back.