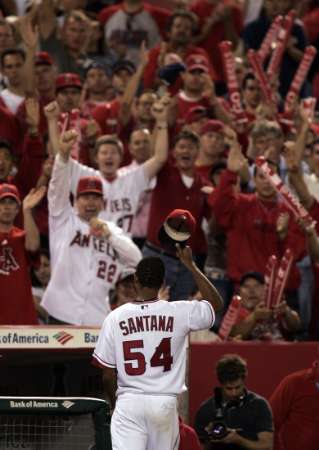 to be able to tip your hat to a cheering crowd.

its what seperates us from apes.

although my current workplace is filled with over a dozen lovely ladies, theyre all caught up in this Angel fever and they know im a Cub fan and have asked me who i will be pulling for during the American League championship which starts today on the south side of Chicago.

and i know that i might negatively impact some of my book sales for saying what i am about to say but true fans of the busblog know that i always keep it real, so perhaps they’ll understand.

As a Cubs fan theres no way I can root for the White Sox unless they were playing the Yankees, or the Padres, or the Cardinals. And even then it would be tough and i would probably be secretly hoping for a natural disaster to break out in the stands.

it’s tough though because its not like im crazy about the American League in general.

and it’s not like the angels are all that beloved in Hollywood unless your name rhymes with Platt Scmelch.

the new owner of the Angels tried to bum rush the name Los Angeles when his team is clearly in Anaheim.

Los Angeles county is one of the largest counties in all of the United States (if not THE largest county – one of you brainacs will do some factchecking for my ass) and Anaheim is plainly in Orange County – yes the OC.

it’s about a mile away from Disneyland. it’s on one of the former orange groves. it’s the motherfucking 714 for crying out loud!

and another thing, anyone who knows the first thing about spanish knows that The Los Angeles Angels translates to

The The Angels Angels.

other than Stuttering John, who the fuck wants to root for the the angels angels of anaheim?

and Fox is no better, they play this crap up. they call them the Los Angeles Angels, and in the graphics they even say LAA like little kissasses, which is funny because me and basart were over at welch’s house on sunday and basart noticed that FOX totally grammared bad:

because he’s a nerd (aka gay) he was all, “it should read ‘LAA lead series 2-1’ because it really says Los Angeles Angels lead…”

regardless i fucking hate the white sox. im glad steve dahl blew up comiskey, im glad harry caray and nancy faust defected to the northside, im glad that bill veeck spent way more afternoons in the bleachers at wrigley after he sold the team,

and im glad they have to face the best team in baseball because even without rest the angels are going to send em packing.

however i do love the Sox manager, ozzie guillen and i hope the Cubs can somehow lure him away.

and their centerfielder podsednik too.