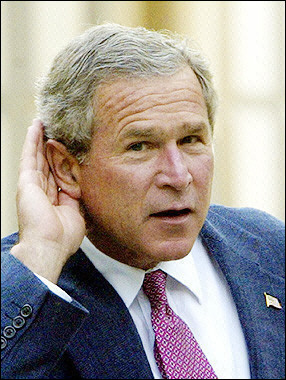 it’s the sound of one party trying to outsuck the other.

when the dems let their presidental victory get stolen away by the supremes in 2000 who would have thought that over the next five years they would turn out wimpier and less intersted in fighting back?

thats one way of sucking. other way include starting wars with people over phantom weapons, not raising any tax monies to pay for those wars, getting caught paying off writers to spread your propaganda, sneaking in a gay male hooker into the white house press conferences, not finding public enemy number one, preventing a minority group from getting married, allowing minorities to drown during a flood, and outting cia agents during a time of war.

its almost as if this was a poker game of hi-lo and both parties keep discarding their aces for those elusive 2s and 3s.

republicans are supposed to be about less government, smaller government, balanced budgets, strong military. but this administration is bloated and intrusive and spending like an identy theif with some elses credit cards. and somehow theyve made our military seem toothless.

however no one has been as toothless and girlie and femme as the dems. even with howard dean at the helm, even with the repubs shooting themselves in their feet at every step, not one democrat has risen above the mess BushCo has created with a giant WTF sign in one hand and a plan in the other.

instead they sit on the sidelines and mumble and sneer as if the american public will see that theyre the good children and reward them one day.

hey dems, you’ll be rewarded when you actually do something of value.

last week you had both the house and senate majority leaders embroiled in illegalities and this week you have the president’s approval ratings at their lowest ever:

use your death move.

explain to the american people that this is all a grand old fuckup which starts with rove, goes through delay and bush and ends up in the quagmire of iraq paid for by you and me.

and then demand support of an impeachment.

the old saying “strike while the iron is hot” should be whispered in the backyards of every democratic barbeque this weekend.

and especially since the repubs, if theyre smart will present a woman named condeleza to the populace to run against her.

how do we know Rove is in trouble?