how the Instapundit would spin the overwhelming Democratic victory last night in the USA, and particularily the complete shut out of California Gov. Schwarzenegger’s four proposed propositions here in the golden state.

people ask me why i pay so much attention to rightwing radio and tv and blogs and its because as a recovering salesman, i appreciate when someone can smoothly turn shit into shinola.

last night the rightwing was handed a steaming helping of shit, so i couldnt wait to see how my favorite blogger was going to turn it into grade-a shinola.

im sad to report, as poor of a showing that the Republicans delivered yesterday, professor reynolds fell on his face today.

“…I may have been right in suggesting that the GOP had lost its mojo with the Terri Schiavo affair. Things seem to have started to go south then, not only because of the issue itself, but because of the divisive venom that so many Schiavo partisans aimed at people who disagreed with them. I think it was very damaging to the GOP coalition, and they’ve continued to pay a price.”

Terri Schiavo is when the Repubs lost their mojo?

it was the venom that the “partisans” aimed at people who disagreed with them that sank the grand old party?

oh, professor, you can do better than that.

first of all, if you wanna blame the Schaivo fiasco dont blame it on the anti-choice righties who wanted to continue to expand the government so the woman’s husband wouldnt be able to do what he thought was right.

how about blaming the President of the United States who cut his vacation short so he could take Air Force One and fly from Texas to DC and sign the bill at 1:11am, partially because of the Darling memo that had convinced the right that this case would be great political leverage against Sen Bill Nelson of Florida.

so how about blaming, not the so-called pro-life supporters who talked shit about those who supported a husband obeying the last wish of his wife, but blame Bush, Dr. Frist, Delay, Martinez, Darling, and Jeb Bush for using a feeding tube and a woman in a fucking coma as an unwitting political pawn.

yes, professor, i know its hard for you to lay blame on those who are actually responsible for failing the party and the people who they represent: americans. and i know that its tough for you to actually believe that the GOP began its slide more than eight months ago.

even though it didnt swing the election, the beginging of the end of the Republican party, your party, professor, the one even youre too ashamed to admit to belonging to, for good reason, officially started their descent October 7, 2004 when special consultant to the CIA, Charles Duelfer and the multi-national Iraq Survey Group hired by the White House presented the 1,500 page Duelfer Report that explained that Iraq had no weapons of mass destruction when we invaded them in 2003, infact the report said that Saddam was much further away from nukes in 2003 than he was between 1991-93.

so why did Bush win re-election four weeks later?

because it took America five weeks to read that report.

that, and they didnt want gays to *gasp* get married.

and they didnt want to believe that the President of the United States of America would lie to them in order to go to war over oil.

they didnt want to believe that a Presidential administration would use something as dramatic as 9/11 as a springboard for their own agenda that had nothing to do with 9/11.

but now they believe that BushCo is really that corrupt, and that you professor are a willing and eager apologist for them and their dirty deeds.

they now understand this white collar gang would attempt to smear a respected former US Ambassador by outting his CIA agent wife, and then lie about it to a grand jury, all because he dared to contradict them in a editorial in a newspaper.

the american people now sing along with kayne west that this administration could have done something to help those stranded on their rooftops in flooded New Orleans the way they went out of their way to try to “save Terri”, but they sat on their hands, ate cake in arizona, played guitar in california, and emailed about fine dining in baton rouge.

they now get it that even the future of the Republican party, the most famous immigrant, the belle of the GOP ball last fall at their convention, Arnold it turns out is a liar just like his nazi police chief daddy, far more interested in his ever-buldging bank account than in the children, the nurses, the students, the teachers, the taxpayers, and the firefighters of california, a state he cant even pronounce let alone govern.

and yes they get it that bloggers like you are simply a tool, another brick in the wall, for these greedy selfish crooks and liars bent on getting richer and more powerful on the backs of average people’s hopes and american dreams, which wont ever come true with BushCo in power because average people dont sit on the board of Haliburton, Exxon, or Gilead

and they understand that this administration will pay off reporters, provide propaganda, and even allow a gay male hooker into the white house press corps for a year on a day pass so he can ask his softball questions in a flacid attempt to pull the wool over the eyes of the average american. a hoax and a betrayal of trust that you repeatedly enable dozens and dozens of times a day.

while echo chambers like you will turn the other way and instead of shining the light at the most corrupt group of rats in the kitchen will aim their god-given talents at the grieving mother of a fallen soldier who simply asks for peace.

what is it about you people using innocent women as scapegoats for your failures: schiavo, sheehan, miers.

but america’s had it. maybe it was this freak show circus parade of scandal, maybe it was the soaring gasoline prices, maybe the bile in our collective gullets couldnt be held back one more day.

which is why yesterday we went to the polls and began our first real steps at taking back our country from the real terrorists who have lied and stolen and torn freedom away from the greatest nation in the world while spending its surplus on tyranny, torture, and horror.

who knew about 9/11 the month previous

and who knew there were no wmds in iraq and no ties there to al quaeda.

last night the terminator got a taste of judgement day

repent now because as page n plant so perfectly said,

your time is gonna come. 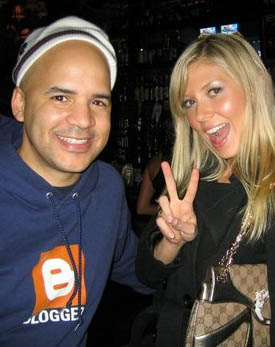 and she barely looks a day over 23.

noones gonna believe anything that i write in this post because its gonna sound all kissassy and whatever, but you know what, its true and i dont care what you think.

jenny is a killer person, as cool as she is beautiful. she can drive with will alone, she can cook as good as any iron chef, and she adores her babies (benji, pete, casey, and matt) with as much love as you can imagine.

and shes a great hostess.

as you can tell from her pictures, she has amazing fashion taste, and shes such a fashionista that she apologized for her sunday morning outfit that included a pink izod plaid vest, designer jeans, and pink asics. i was all, are you aplogizing to the doggies, cuz i dont care.

shes a big fan of music (currently rocking to the arcade fire, the libertines, and the ladies and gentlemen) and is pleasantly knowledgeable about the national hockey league, and is now working on curling.

in fact when people asked her in front of matt what the rockstar was going to get her for her birthday she said she was hoping that he would hook her up with some sweet cannucks tickets. tell me thats not an ideal woman.

indeed, when she recently was planning a trip to visit one of her best friends in colorado she intentionally scheduled it so that she could see the cannucks play the avalanche in denver. because the world loves jenny she ended up with seats on the glass right next to the bench.

if the ladies werent already jealous enough of her for being happilly married to canadas coolest rocker, jennifer pretty much eats anything she wants. including deserts. and i never saw her work out. i never even heard her talk about working out. maybe its her good karma. or maybe she secretly snuck in a few miles on their treadmill when matt and i were oot and aboot. 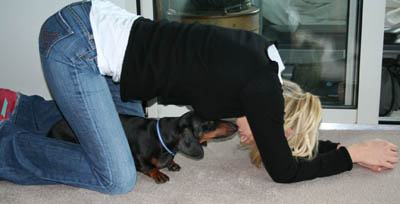 animal lover, activist, and vegitarian, mrs good defended her husband when their american visitor accused him of being gay for buying salon-purchased hair and hygene product by saying that matt doesnt buy things that are tested on animals. and then she told the visitor about some natural products that he should start using.

although shes an aspiring fashion designer, i think jenny should go into either animal training or working with peta because although she has an excellent eye for hot clothes, her heart is with the animals, so much so that when we saw the scariest spider in the world she still didnt wish ill on it – bad drivers, however, are another story.

finally, how beautiful is jenny? well, beauty comes from the heart. and jen’s heart is so beautiful that when i first met the goods they were staying at the mondrian on the sunset strip and she was at the pool and one of the first things i ever told matt was that he had the hottest girl at the hottest pool in the world.

he said, thank you, i know.

i hope the cannucks shutout calgary for you tonight and theres a bench-clearing brawl in your honor.