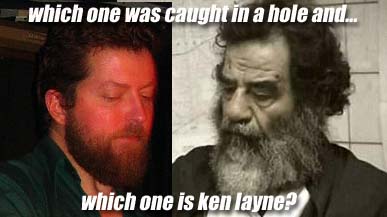 nice job finding saddam. to be honest i never thought you could do it.

not like it was you who couldnt find him.

and i know it wasnt actually you who opened up the fake door tagged him and said “youre it!”

but you know what i mean.

and im really stoked that it wont take an hour and a half to get on an airplane anymore.

and that they wont make people get out of line and take off their shoes anymore.

and the stock market will go back up, and stay up.

and man, now that you have him all locked up and captured, im sure he will be telling you right away where all those weapons of mass destructions are.

and we will never have to worry about the good people of iraq ever blowing up the world trade center, or the pentagon again.

speaking of which, when are we going into saudi arabia?

i love that one line of yours, if youre not with us, youre against us.

almost as good as your dads read my lips.

theyre not with us

are they with us?

theyre not with us.

if they were with us, theyd just let us walk in and look around for osama.

and if theyre against us now, the same way they were against us before, then arent they even more dangerous than saddam was?

they’re not with us.

so hey, when are we going in?

and by we i dont me you.

and i sure as shit dont mean me.

or is it that now that you have your re-election pretty much wrapped up, and you wont have to steal this one, youre not interested any more in countries who are against us?

countries who were actually behind 9/11, and not just the most favored scapegoat like iraq was?

what we learned today was $100 billion, 9 months of quote unquote war, and foot soldiers walking around a country hunting for a man, can indeed yield up that man.

seek and ye shall find.

so when will we go to saudi arabia and seek and find osama?

who blew up america and left behind a gaping wound?

i applaud you for finding the straw man after so much time, money, and close to 500 american military deaths.

when will you ask the american people for another billion, another 500 deaths, and another nine months to find bin laden, the terrorist cells that helped produce 15 of the 19 911 hijackers and instill a democracy in saudi arabia?
saudi arabia doesnt have a democracy.

“there’s not even the pretense in Saudi Arabia of a democracy.”

people get amputated by the crown so they will confess to crimes, and some criminals are executed in public.

a few years ago they were executing two people a week.

and if youre not a criminal, lets just say you’re gay, they kill you.

didnt we just blow the fuck out of iraq and just got a boner cuz we caught saddam cuz he killed his people?

do we only care about murdering tyrants when they kill heterosexuals?

like i said im stoked you got saddam, and im stoked you care so much about human rights and weapons of mass destruction and about dethroning nations who steal money and freedom and hope from their people and literally murder them right there in the streets.

and im stoked youre not going to stop at bringing a democracy to just afghanistan and iraq.

im stoked youre going to bring it to saudi arabia

declare war… sorta, blow shit up, die a little, kill his sons even the kids, be patient, spend a ton of money your own country doesnt have, keep asking people where bro is, then find him hiding

i feel so safe right now.