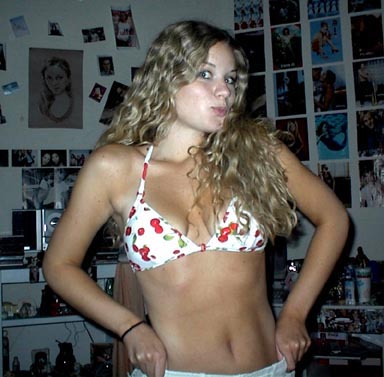 my does time fly. just the other day she was 19 and typing sweet nothings in my chat box.

never have i deserved any of the girls who i got to spend time with, but no way should i have had a girl like ashley like me the way she did and probably still does.

yes, it began as a simple internet friendship, and yes, it turned into much more.

shes as beautiful on the inside as she is on the outside, and shes even more beautiful in person.

when she kisses you she keeps her eyes closed and lets it sink in. and every one is as important as the last.

you even get extras when you least expect it.

she likes to hold your hand at all times

and she giggles when shes happy or when shes naughty.

and i said three lovers in three ways

and we all danced to the music of janes addiction.

i danced the best

and all i wrote down was ashleys awesome.

she said you forgot to write the stuff about gwen and i said gwen who.

i miss her immensely.

theres no replacing someone as sweet, full of excitement, and a thrill to be with.

and im pretty sure my website has suffered with her absence, but for her theres no replacement.

youre still in my fondest thoughts, and if you didnt notice, that tinkerbell header has been up all week to celebrate this day.

fuck that, let me tell you the most important thing about los angeles: it’s tiny.

and because its tiny you really should pick who youre going to piss off and what bridges you decide to burn when you burn them.

and you can pretend that you are mr idealistic and youd never burn any bridges but there are some people who will cross your path that will make you – literally make you – go up to them and tell them to fuck off.

because los angeles is perfect they will never move away, and you will run into them from time to time, but if you play your cards right you will also run into the good people of this town repeatedly over the years.

so anyways Cuban girl used to work at this huge company that was down the street from E! on fridays she and her best friend would have lunch with me and my buddy in the closed captioning department.

so not only was i having lunch with one of their employees again, but i was driving right past the building that i occupied for four years.

very weird feelings. not all good ones.

i saw some people i recognized. i even honked my horn at a dude i used to schedule but he didnt recognize me with my fuzzy beard, shades, and lowrider, but its all good.

she got in the ride and i was all your boyfriend lets you leave the house like that? and she told me that her man was hungover from the night before and could barely open his eyes.

as we drove down wilshire we realized we had no idea where we wanted to have lunch and because she had a meeting to go to in an hour we couldnt drive all the way to westwood where i was gonna taker to mr noodle, my favorite. so we drove up rodeo drive cuz you only live once.

fortunately we ran past a little italian place on beverly named Pizza Rustica which had huge slices for $4 and outdoor seating.

they also had a little room with a bed that was curious in a small restaurant.

she had the mushroom slice with water, and i had the bbq chicken and a diet coke.

and then after lunch i wouldnt let her into the car until she modeled for me for 4 irritating minutes. she squirms and forces her smile and looks away and closes her eyes. shes one of the prettiest girls you’ll ever meet but definately the worst model. you feel like youre raping her with your camera. it’s not fun for either but its like the dentist – its gotta be done every six weeks.

so as we drove past spagos i saw an extremely well dressed man getting out of a rolls and i was all i know that guy but because theres so much resin in my head it took me a whole minute and i told karisa Soul Train i know him from Soul Train and we looked at his liscense plate and it said 1ST and i was all “first”? and she said no “1 Soul Train”

and then i was all don corneleious

so let me tell you one more thing, aspiring bloggers, strangers will email you and provide photographs and invite you to a bar

on a wednesday night, when you should be watching Lost

but these pictures are so good that you reply back with

one drink, near my house, two drinks if this is realy you

and four drinks if youre buying.

for Christmas break and ran into a very interesting machine

the difference of this one though is its filled with water

now im on very good terms with pretty much all of my girlfriends, so i could call my sweet x up right now and ask her about this machine… like how much it cost, was it a game of chance, or was it an actual self-service lobster grabber

the bears and the patroits are in the playoffs.

for some reason she has confidence that the pats can continue their winning ways now that they have most of their team back from injury,

i think shes living in a fools paradise as that pretty boy at qb is going to fall at the hands of pittsburg or whatever pansy afc team theyre playing.

the bears however are a team of destiny this year

a throwback to the monsters of the midway AND the superbowl shuffle sqad of twenty years ago.

and now that we have rex grossman back, everythings good in the hood.

and then i plan to talk to her about buzznet

namely about why she isnt putting more photos up on her strip.

i may even threaten her to put a picture up on my blog starting tomorrow every day until she starts submitting regularily, just like all of you should.

so how has Buzznet fared since they signed yours truly?

overhead in the office the other day, our hits and signups in q4 have jumped 35%.

one man surely cant effect a web site that much in such a short period of time.

however to celebrate our continuing success i will continue to link to peoples buzznet accounts at the bottom of each of my busblog posts.

if you know of a worthy buzznet account that im overlooking, please let me know.