Political Theatre of the Absurd
By ANA MARIE COX
Washington

THE bad guy with a fondness for quoting the most extortionary lines of “The Godfather” walks out of the courtroom dressed like a film noir villain. He was there because his pretty-boy partner had already dropped a dime on him. Lying, cheating, stealing, gambling … and Indians. By Washington standards, the Jack Abramoff scandal is about as theatrical as you can get without having sex in the headline. (The last scandal here to involve costumes was Abscam: we were due for something that would offer better material for fancy-dress parties than blue dresses and scooters.)

Until Tuesday, Mr. Abramoff’s elaborate web of corruption was an inside-the-Beltway story: we were the only ones with the patience for it. But nothing simplifies a scandal like a guilty plea. Now, the queasily intricate dance of payoffs, favors and influence-peddling that seems to implicate people from the White House on down has the nation on edge.

Yet despite predictions that Mr. Abramoff’s deal is the beginning and not the end of the story, it’s difficult to see if this one will end with the satisfying clink of handcuffs.

True, we are told, repeatedly, that the case has half of Washington’s powerbrokers looking over their shoulder and the other half salivating for a parade of perp walks. And in Washington, a high body count gets everyone’s attention (except maybe the president’s). Mr. Abramoff’s connections seem infinite; attempts to follow the money give you something looking less like a flow chart than like spaghetti. Delicious, felonious spaghetti.

But who is actually going to receive Jack Abramoff’s Lady-and-the-Tramp-style kiss of death? The only plausible candidate at the moment is Representative Bob Ney, an Ohio Republican who appears to be a rather ham-fisted bungler. Mr. Abramoff had dealings with dozens of Washington bigwigs, yet Representative Ney is the only one to make a (pseudonymous) appearance in the indictment. 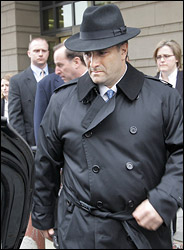 What Mr. Ney did was either very bad or very stupid, likely both. But he hardly needed Mr. Abramoff to besmirch his reputation: he has recently drawn scrutiny for the unlikely feat of winning $34,000 on an initial $100 bet during a London casino romp, and on another junket he met with a convicted con artist whom MSNBC reported had “cheated on his taxes and was involved in a deal to swindle Elvis Presley.” Mr. Ney refused to discuss these issues with the press because of “national security implications.” Well, Richard Nixon did give Elvis a federal drug agent’s badge.

Despite the desperate glee of the editorializers and the almost-as-desperate rinsing of Abramoff funds from Republican coffers, the smell in the air is panic, not blood. In order to cast their net beyond Diamond Bob Ney, the feds would have to, as one Republican source told the Times, “pursue a different definition of bribery” – that is, prove that “if somebody were to give a gift or a campaign contribution in the same time period as a member took an official action, that in and of itself would constitute bribery.” And you thought Patrick Fitzgerald was criminalizing politics.

Sad to admit it, but most of what Jack Abramoff did with politicians (as opposed to his outright fraud with Indian tribes) wasn’t criminal so much as extreme. The Hollywood arc would have a chain-gang of Congressmen breaking rocks by the final reel, but we are unlikely to get such satisfaction outside of celluloid.

The best we can do is hope that the lack of so cinematic a finish will not mean that the Abramoff affair will be irrelevant or even forgettable. For one thing, Mr. Abramoff may go down as the first man in American history too corrupt to be a lobbyist. Poor Paul Miller, who as president of the American League of Lobbyists (that’s the one with the designated-hitter rule) has the thankless task of defending his trade, told reporters he was reluctant to say that Mr. Abramoff even deserved to be called a member of the profession. O.K., but he deserves to be called other things. Some of them unprintable in family newspapers.
http://www.blogger.com/img/gl.link.gif
Other modern Congressional kerfuffles have not been as flashy. Neither the Congressional check-kiting scandal, the Keating Five imbroglio nor Dan Rostenkowski’s thrilling run-in over postal franking privileges are likely to be made into a mini-series any time soon. But these past episodes did have the advantage of being prosecutable.

With his casinos, phony charities and Scottish golfing trips, Jack Abramoff has drawn attention to Washington’s fascinatingly filthy underbelly. One can only hope that the melodrama will keep people watching. While we should hesitate before defining corruption still further down (“No chiseler left behind!”), we don’t need to pause before throwing the bums out. Ask any lawmaker: the harshest penalty one can receive isn’t prison; it’s losing.

Ana Marie Cox is the editor of the Wonkette blog, author of the novel “Dog Days“, and met tony and sk smith in ’05