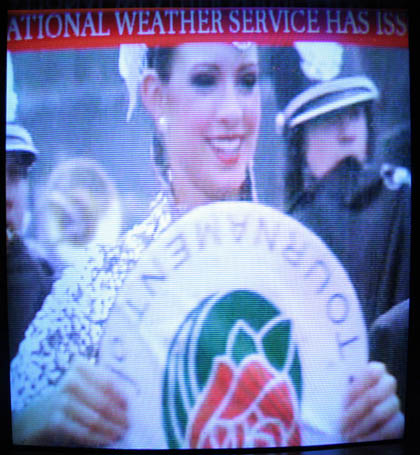 aka the tournament of roses parade
pasadena, california

in these parts the motto is the show must go on. and even though it hasnt rained on the rose parade in fifty years the show marched on without even a delay.

over the last two weeks ive been driving all over the pacific northwest and northern california braving some of the strongest and wettest storms in decades.

but going to work this morning i saw floods like ive never seen in the streets of the city of angels.

as i drove home from work because nobody was there because it was so freaky fucked up in la with power outtages on sunset and thirty foot palm trees whipping in the strong winds voilently shedding themselves of dead palms which slammed ontop of sogging parked cars below.

stoplights flashed red black red or didnt flash at all.

los angeles shuts down in the rain even though it rains every winter. 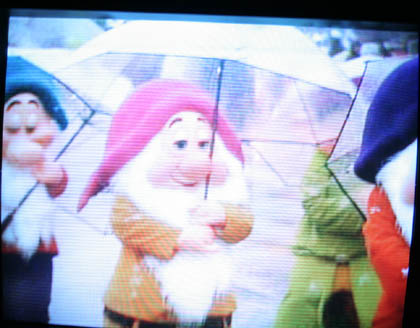 i drive slowly in the rain.

everywhere i went, from northern california to oregon to washington and canada everyone drove fast, or at least the posted speed limits, like fools.

do these people have that horrible of lives that they wouldnt mind being dead on the side of the road after clipping someone, swerving headon into a rocky ditch at 65 miles per hour and putting a nice crack into a dripping wet boulder nose first.

my advertisers wouldnt like that shit, so i drive slow.

hundreds of thousands drove to pasadena today to see the rose parade and they had raincoats and umbrellas and hats and foul weather gear and they shivvered and the floats floated past and the bands played on.

i put on my pajamas and right before the disney float appeared i heard three short staccatto beeps, ktlas audio dropped out and a man who sounded like he was in an underground lair said this is the national weather service, theres a winter storm warning for central los angeles and la county or some shit who knows, it was just awesome so i hit pause, lit a fire in the fireplace and took some pictures off my tv for my buzznet page.

at first i was a little perplexxed by the warning because they dont do that very often unless shit is fucked. but meanwhile you see all these people totally hanging in there at the parade.

and then i looked closely at the pictures i took and they were telling us not that shit was fucked, but that it would indeed only be fucked for another half hour.

and then a half hour later the rains slowed up but the winds kicked in, but then they died off and now the sun is out for those of us who at 2:30p wouldnt mind going to zancau chicken for some lunch.