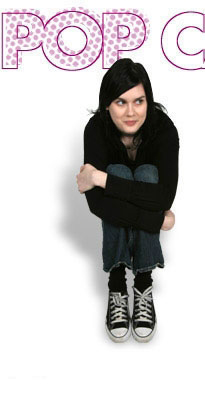 and i read pretty much every blog that there is. so when i saw whitney matheson of the usa today blog right there in the Red Bull House i was all marcbrown marcbrown!

but he was occupied so i decided to talk to her myself and represent buzznet, which i can do pretty well, but i was still nervous because a) i totally love her blog b)shes freaking cute as hell in person c)i didnt wanna mess up and have her think that buzznet and red bull was lame.

turned out she got really excited about all the things that i got really excited about and we were able to secure her a key to the house and this morning when we got the USA Today delivered to our front door marc was all, hey did that cute girl write anything about us and i was all dude shes a blogger she doesnt blog in the paper, go online. but neither of us rememberd to go online until just now.

and whaddya know, she wrote four posts about her experiences yesterday at the Red Bull House including this one that even mentions Buzznet.

Good morning again! Before I take off to do something very fun and exciting (I’ll write about it later), I have to mention this place I went last night called the Red Bull House. It’s set to become one of the hottest hangouts during the music fest, and the fact that it’s extremely difficult to get into means it may be a destination for Austin celebrities and other VIPs.

I, of course, went early to avoid the crowd and get a good look at the place. Since it’s sponsored by Red Bull, every bar features various energy-drink cocktails, as well as beer, liquor and water in flask-shaped plastic bottles. Co-sponsor Buzznet helped turn the space into a high-tech paradise: One room features computers with free Web access. Another is lined with keyboards, where partygoers can control bass, scratch melody and mashup features to make an original song. Another room features small monitors mounted on metal sculptures. I’m not sure how well I captured this in the photo, but each monitor projected an eyeball — and when you’d walk by them, the eyes would spin to stare at you!

so now that shes my bff i hope i run into her again soon so i can buy her a free beer and be a fanboy all over her.

last night people were doing that to me and its pretty awesome i gotta admit, but now that the music folks have shown up its a whole new vibe. goatees and bald heads everywhere.

me and bunny were getting her press credentials and i was asking one of the dudes for help and he goes, “tony pierce”? and i was all this is the greatest place ever. ever. ever ever.

but then last night someone passed me a jay and i was passing it to someone else and right when i exhaled someone said “tony pierce” and i was all this is why i will never be able to get a usa today blog, but lets hope our pal whitney continues to kick ass so other reputible journals can see the importance of blogs as a force of their staffs (so to speak) and they will hire more bloggers for more papers and mags.

and then perhaps someone will hire me to sit in hotel rooms like im doing now with bunny mcintosh while we get ready to head out onto 6th street and take on the day.

bunny mc would like to send some shoutouts to: her fabulous husband richard, her girlies in hotlanta, nettie, bee bee, and chan from cat power who couldnt make it here to sxsw – we miss you baby.