didnt really feel like blogging last night or today. which should tell you that something was wrong because usually all i want to do is blog.

i got a message last night from kristin pony who is doing fine and still looking beautiful and studying to be a lawyer, etc., who told me about this grisly murder in oklahoma, near where she lives.

turned out there was a 10 yr old girl who was missing. she was last seen going to the library to get on the computers there to surf around via her AOL account.

two days later she was still missing, which was odd because she lives in a pretty small town. so the cops finally started following some leads or going house to house, im not sure what they did but they ended up at this twentysomething dude’s apartment in the same complex as the girl and then found her mutilated body in his closet according to The Oklahoman

Apartment manager Tim Bayer told FBI agents he heard
[Kevin Ray] Underwood was the last person to see [Jamie Rose] Bolin before she went missing. Agents located Underwood about 3:45 p.m. and questioned him about the girl’s disappearance, the affidavit said.

When they were finished questioning Underwood, agents took him back to his apartment. He agreed to let agents search his apartment to make sure she wasn’t there. When agents looked in a bedroom closet, they found a large plastic container sealed with duct tape.

Underwood told agents the container was filled with comic books. When agents opened the container, they found a shirt believed to belong to Bolin.

Underwood then told agents, “go ahead and arrest me. She is in there. I chopped her up,” the affidavit said.

The DA called it gruesome and is seeking the death penalty against the man.

McClain County District Attorney Tim Kuykendall said that in his 24 years as a prosecutor, “I’ve never seen a homicide quite as atrocious and heinous and cruel as what this little girl suffered.”

so why did our pal mad pony let me know about this on the holiest night, good friday? because the killer’s myspace address got out, somehow, and that lead to his blog.

and guess who’s on this fuckers blogroll?

and guess who this asswipe quoted a year and a half ago, reprinting an entire post?

and whats even worse is as the little girl was dead or dying or chopped up in his closet he sat in his room and blogged about human fossils. 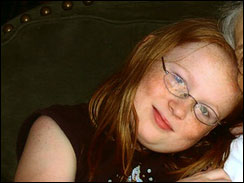 i feel sick thinking that someone with the potential to do something as vile as chop up a sweet little freckle faced ten year old girl would in any way be attracted to anything that i ever wrote, let alone put me on his blog roll. and im too grossed out to think about it but i know i linked him back, something i like to do when someone links to me. not because im a fan of all the blogs i link back to, i do it out of general courtesy.

ive avoided writing about this all day.

i even did my taxes instead of blogging. i even cleaned my house. i did anything i could to try to figure out what to do other than write but i knew the only thing id be able to write about is this prick and his indirect relationship with my most prized possession, this blog.

but whats scariest of all is as you poke around on his blog and see how he answered surveys and wrote about this or that you try to look for clues that he was this monster just waiting for something to push him over the edge, but i cant find anything like that. to me he seemed like a normal dude working at a 7-11, who didnt have many friends, was beat up a bunch in school, and wasnt all that lucky with the ladies but not necessarily a murderer.

he had no criminal record. he didnt use a gun. wasnt on drugs as far as i could tell from his blog, or booze.

yesterday when the facts were fuzzy i was hoping that he wasnt the guy because his blog just doesnt look like that of someone who would just destroy the life of a little kid – or his own life. but today when i read that he admitted it, it made me feel so gross.

and despite the fact that theyre probably going to shut it off when news gets back to them that its up, i hope Blogger doesnt touch his blog so we can see that murderers – cold thoughtless killers – walk among us, and even look human.

UPDATE: His plan was to eat her.

“Regarding a potential motive, this appears to have been part of a plan to kidnap a person, rape them, torture them, kill them, cut off their head, drain the body of blood, rape the corpse, eat the corpse, then dispose of the organs and bones,” [Purcell police Chief David] Tompkins said.