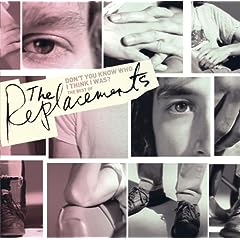 Bastards of Young: The Best of The Replacements
Sire/Reprise/Rhino Records
available 6/13/06

i would have replaced #18 with “i hate music”

Rhino is currently streaming it for free WIN + QT

newsweek interviewed paul and the results are predictable and softballish in nature and allows mr westerberg off the hook at every chance. no wonder bush is still in office.

Newsweek: Is there a magic [dollar] number that would get you guys on the road again?

Westerberg: Well, that would be the magic question. No, it’s more the willingness. I don’t know what it would take for us to actually rehearse these old songs … Also, in the course of the last six years I’ve gone from being completely sober to one inch from death to completely sober again. Right now I’m very healthy, but I know secretly, in the back of my mind, that when you go on tour, that’s when you tend to weaken when it comes to whatever vices you might have. I know Tommy’s aware of that, too. So a little part of the reunion thing is us being afraid of getting back together and falling into our old ways and not making it home.

Newsweek: You and your wife have a son now.

Westerberg: Yeah, Johnny. He’ll be 8 in a couple days. I coach his baseball team. We played last night, and the third baseman from the other team said they’d lost their last game by 43 to nothing. So I started stopping our guys on third base and holding ’em up, but we murdered them anyway.

i cant explain it either.

it was really late and i didnt want to blow it so when i leaned over to turn on the music the pogues playlist clicked in and i was all well its not prince but i dont think this babe will mind.

and sure enough the same girl who last week swore she couldnt care less about music suddenly was all, what is this gaelick hour? and then went back to pretending she wanted to go home.

some chicks in hollywood are terrible actresses.

i bought a playstation game the day after i was fired. i figured id drink a lot and master a game. i chose Major League Baseball 2K6. i could find any others. this one had the mlb insignia on it and derek jeter on the cover. seemed legit.

right now shes laying on the couch chuckling to last comic standing. im chuckling too. i like the really fat black lady who screams, and the hippie with cerebal paulsy.

but they have a new guy now so the show is perfect.

i had a chance to housesit in new york for a month so i called this girl up who lived nearby if she would be my one-month summer girlfriend. she said it sounded like an escort and i didnt have a good comeback. why is it that im never prepared for people to say no to me, even though they say it way more than id prefer.

ill tell you this, if that chick was gonna housesit in la for a month id totally be her one month summer boyfriend, id be that girls one hour boyfriend. no jokes fellas.

someone asked me last month about Howard Stern. the question was do i listen to more or less howard now that hes on satelite.

the answer is because of the constant replays on Howard 100 i listen to about 2-3 hours of the 5 hour show. and i missed him a lot last week.

i listen to about 4 minutes of bubba the lovesponge, and about an hour of ferral a week, which is so wrong since i love ferral. i have one sirius unit in the car and i will get one in the house very soon.

speaking of major leage baseball, today was 6/6/6 day and those jokesters at the mlb scheduled the Anaheim Angels to play the Tampa Bay Devil Rays. the angels versus the devils.

and now at this point i need to attend to my guest. i leave you with a video of prince live in japan.

i had breakfast with a cuban.
i had lunch with a blonde. and then i ate out with a brunette.

this was turning into the best vacation ever until i got a phone call
that brought me one step closer to the best job ever.

heres two videos. one starring the devil, the other about the mark of the beast.

the cubs however are losing.

i live in hollywood and many of the prefixes here are 666 including my home number.

when i was signing up for a number the lady recommended something that started with 665 and i was all hey wait i just remembered this is hollywood, do you have any 666 numbers and she hesitated and then was like yep pretty much anything you need.

and i got an extremely easy-to-remember phone number

which i never give out since im never home.

its actually 1:39am on 6/6/6 and when i wake i will escort a cuban girl so that we can interview people in the six most evil parts of los angeles

i want to ask the people what 666 day means to them.

she told me not to blog about it before we do it because someone will steal the idea but you know what, theres not an idea that i have that i wouldnt love someone to steal.

why? because then i can take the damn day off and try to get with this girl!

its gonna take us all day just to drive from the valley to the orange curtain and then back over here. and she’ll probably want to see a movie.

so yes, i would have loved it if someone said that they were going to interview people in LA about what 666 day means to them. and have it posted that night. devils night theyre calling it. night of the dead.

heres why 666 doesnt bother me. as a Christian i have nothing to worry about. the number, which comes from revelation simply says that only 1/3 of the people will believe in Jesus and the rest are lost. 1/3 is .333, 2/3 is .666, therefore it makes sense that the mark of the beast would be 666 since he represents the lost. and of course i like to have theories that arent in wikipedia.

how many believers of Jesus are there on the planet right now? 33%

and so when people like my maid ask me if afraid to have 666 in my phone number i say baby im way more scared of hell than i am of any phone number. that number reminds me to be good. because its our souls that get judged not our superstitions.

do i even know anybody in orange county?

ok its 2am and im watching closer for the twentieth time. at this hour theres nothing more preferable than natalie portman in those outfits, which is funny because there are very few hours when that isnt the case.

the dutch are going to pray all day today

Roulette wheel numbers add up to 666.

KNAC names it National Day of Slayer, and will play non-stop slayer all day.

to promote the new album strumming with the devil, bluegrass versions of classic van halen gems that comes out today, david lee roth and his new crew will appear on jay leno tonight.

and happy birthday to my first california girlfriend who also happened to make me a man, as she was born on 6/6/66

if you live in LA you might want to creep over to the Henry Fonda where you will be greeted by:

Church of Satan founder Anton LaVey, hispanic hollywood elvis impersonator El Vez, musclebound longhaired leaping gnome Glenn Danzig, the grandson of the legend Hank Williams III, and special guest Rudy Ray Moore also known as Dolemite among others in what they call A Tribute To Evil. thirty clams. hank iii is worth that alone. doors open at 6:60 for some reason and not six minutes later.