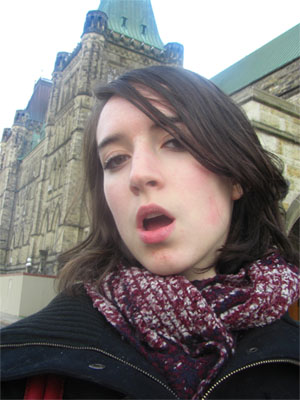 I wrote you this post because it’s your birthday and because it’s been way too long since I last wrote one. Post it on your blog if you’d like, it’s for you.

p.s I included a picture of me on parliment hill in Ottawa (Canada’s capital city) trying to look cool.

In the summer of 2005 I was working a very shitty job in Vanouver, BC. I would wake up each morning, make an inane commute on the public transit system I so despised, and arrive at the Italian deli for which I harbored an even more motivating contempt. I would tie on my red apron, a symbol of my incarceration, and spend my days explaining the difference between plain fettucini and herb fettucini to collagen-lipped trophy wives so dense beyond comprehension. My huge, sweaty Italian boss would crack sexual innuendo jokes that fueled my contemplations of how one might kill themself with an industrial grade meat slicer. I can remember the day when I was asked by my boss’s wife to clean out the microwave, the microwave reserved only for the bosses, and as I peered into its tomato-splattered interior I thought quietly about serial murder. It got to the point where I could guess exactly 100 grams of bocconcini cheese, or $2.50 worth of proscuitto, and yet these are not the kinds of things you would ever hope to excel in. Estimating the price and weight of gourmet Italian groceries will never make you a happy person.

I can’t really tell you what got me through the majority of those shifts. Sometimes I figured I had simply melted into the floor and taken my place among the dirt and dried, discarded pasta shapes. At other points I was sure that my soul had floated off to somewhere else, anywhere else. And yet, after each ten hour shift of forced sincerity I would somehow still be standing behind the meat counter, beside the pasta shelf, and in front of all those God-awful customers. I can remember one man telling me that he felt as though “my smile wasn’t genuine”. I wanted to give him a round of applause and a nice big gold star. “My sir, you’re fucking perceptive,” I thought.

I transport myself back to those memories, to that counter, and I can remember the day my heart stopped at work. I was serving a woman with a purse-dog some kind of cheese that was never going to be low-fat enough for her specifications when I saw a bald head. I jerked my glance up immediately and stopped what I was doing. I didn’t care that the customer was becoming impatient because I was almost certain that I had just seen the infamous Tony Pierce. I straightened up, studied the man from afar as my heart raced and my breathing completely ceased only to realize moments later that he was nobody. I bent my head back down in disappointment, put a block of feta in a container, and continued in my submission.

I later faked insanity to quit that job. I also later met Tony Pierce and he was exactly what I’d hoped for all those years ago, standing beside the smoked gouda tortellini staring off into freedom.

to everyone who has sent me nice emails and comments and posts and nudes and facebook wall things and phone calls and to everyone who celebrated with me yesterday a day early and to especially whoever sent the Go Team to play at echo park last night and hollywood tonight thank you! i appreciate it so much!!