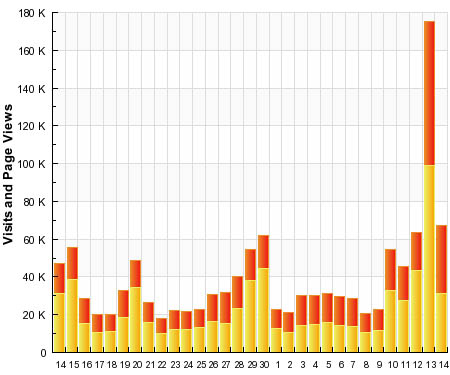 very mixed feelings. mostly sad. yes im excited to go change the world, but LAist was like being able to have the keys to that 66 mustang convertible with one instruction: floor it, fucker.

and then half way through the race learning about nitrous.

yes soon i will be part of a team that has the keys to the space shuttle, but you never forget your first girl. LAist was the first time i was able to do something i loved professionally and i was given all the freedom to try whatever i wanted: doing donuts on ice, jumping over semis, participating in the Cannonball Run. it still blows my mind that 4 months into the gig i asked if i could drive around the country and blog and my bosses said, go for it.

although i am pretty sure that my new boss is going to be just as open minded and trusting in me as my previous bosses, heres one thing that the Gothamist head honchos implemented recently that i love – they opened up our stats for all to see.

this is the main page of our Site Meter, which is like showing someone your bank statement. its scary for a lot of sites to do this because many sites lie to their advertisers and competitors about their hits. part of Web 2.0 is transparency and it will be interesting to see who tries to take shots at LAist in the future when they have their inevitable dips in hits. interesting because many who might use this transparency against them wont have their stats published publicly and/or wont have other Web 2.0 features like open or unmoderated comments.

but be careful with stats as they dont tell the whole story. for example, if you look at LAist’s monthly numbers over the last 6 months, it might look like we are on a downswing due to our monster September. truth of the matter was we would have probably hit 1 million in September but on the last day of the month we found ourselves with 2 stories on Digg’s top 20 early in the morning and they stayed there all day giving us like 350k hits in one damn day. yes we earned all of those pageviews, but it was such an improbable accomplishment that it was impossible to repeat during the months following. so in actuality, a better way to look at that trend is to say, yeah LAist has consistently averaged about 1 million pageviews for the last 6 months (even though august was below 900k and september was way above.)

inside blogging, i know, but for the three of you out there who enjoy it, root around in our stats and have fun.

the graph above is our stats for the last 30 days. take a good look at how our team was able to crank it up a smidge whenever we wanted, be it a few days before the end of the month, or during the last days of my regime. if LAist was a car, it was a car that responded so willingly to anything the team wanted. so awesome. so perfect. i will miss the team and that gorgeous vehicle.