i cant believe life can be this good. people at work treat me with so much respect. yesterday i spent most of the day on the news floor. the real news. like the city desk and the foreign and national desks. no offense to the others but the busblog has always kept it real.

and whats funny is a few people here and there were all, tony if theres one place thats gonna give you the stink eye its them. but im here to report that every floor at the paper has been just as sweet and kind and open and willing as the next.

every department knows how important adjusting with the everchanging way news is delivered is vital to their future – and present. i spent hours with the city editor talking about his key superstars and his short term and long term plans. we talked about things that his writers want, things that i want, and things that he wants. i got to meet mr steve lopez who is one of my heroes and we talked about some very interesting and very forward-thinking ideas.

i talked to mr charles ornstein, the young man on the health beat who was part of the team that won the Pulitzer a few years back.

and then i got to meet and talk with ms. jill leovy the woman and brains behind the amazing (and grossly overlooked) Homicide Report. a very sensitive blog (that i probably shouldnt call a blog – cuz they dont) where one reporter tries to document every single homicide in LA.

we talked about the odd differences that the coroners office determines is the difference between a homicide and not-a-homicide. for example, when the old man plowed through the farmers market in santa monica a few years back thats not a homicide because the car was accidentally a weapon (i think that was the explaination), however if a gangmember uses a car to do the same thing it is a homicide because it was super intentional. dont quote me on that, but it was fascinating to talk with her because she looks so unassuming in her jeans but she speaks so clearly and professionally with beautiful use of big words mixed with cop words (we were on a 2-11…) plus she knows different types of spanish.

shes the sort of pro that i wanted to work with. and the place is full of people like her from bottom to top. 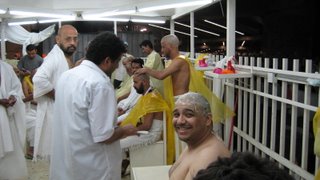 after i sat with the foreign desk as we went through the babylon blog. one reporter is at the hajj or on the hajj – dont quiz me. embedded basically with all these muslim pilgrims reporting from freakin Mecca! uploading pics (right) and vids as it happens! i had problems getting a signal from Coachella to show people that i was drinking with Lady Sovereign and bro is in deeeeep from Mecca busting with posts day after day after day.

tell me thats not the perfect mix of blogging and journalism!

so where do i come in? look at the comments on these amazing posts from the Mid East – zip. so either no one knows it’s there, or people are so amazed theyre speechless. either way, your boy is about to spread the good news to the right people. watch me work.

thursday night i spent all night (6p-9pm) meeting every single Sports copy editor, both of their main editors, and several of their design people. a friend of matt good’s of all people, knows one of their copyeditors and he told them that i was coming. and they invited me to watch some football with them. so i went down there and was so warmly welcomed it was as if i was the kegmaster or something. but seriously these are people who have worked at the paper for 15-20 years who know it all. who are natives. who love their paper. who know so well whats missing on every level. and who want to do a group blog like no other group blog i could have ever created even in my fertile imagination. and they all wanted it. and their bosses were all, do your thing freak. 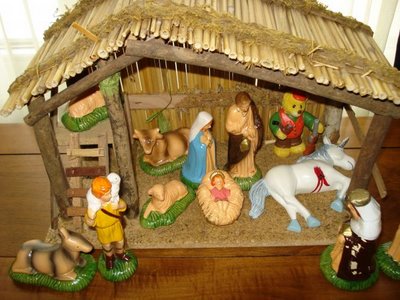 so watch. and be amazed. cuz its gonna go down and dont give me the credit because all i did was say, um hell yes. infact i want to go to Paseo Nuevo and see if Stampa Barbara is still there cuz i need them to make me a rubber stamp that says HELL YES because i have heard so many great great great smart ideas that i cant believe people are waiting on my approval because i wanna wear out that stamp.

plus my assistant is brilliant, and a vegan, and last night we stayed late as she slowly convinced me to go vegan. which i might do – during work hours – just to see if i can do it. shes the best best best as well. if you only knew the level of support i am getting. and all of this is just scratching the surface. and yes i wore a suit yesterday. minus the tie. and i didnt mind because we have serious business to take care of and lots of it is in my hands and they trust me and im honored and i cant wait to show you the results but it is a huge corporation (which im co-owner of now, oddly, thanks zell) so things happen slowly, however some of the things might start during our CES coverage, which i was involved in a cool meeting regarding yesterday which was also eye opening and wonderful. why? because, again, it was smart people saying smart things, quickly, as a team, in a way that youd want a smart team to work.

not at all like what most corporations work like. why is the times different? because its a newspaper who have done it before. staffed by veterans. pros. mixed with some youngins and eager beavers, all who want the exact same thing – excellence. world class excellence.

i didnt eat or pee all day yesterday until 10pm cuz i had no time for those trifles.

i’ll work out those details later. until then, at the top of this post is a pic of my truest in Afrique. and this afternoon i dine with Karisa as we do some last minute Christmas shopping. then Christmas eve i fly to hangover park. then new years eve eve i jet to the GTA to party with pitt, raymi, duane, fil, christie (who provided that sweetass manger pic above) and all my canadian friends, then i get back home after that snowball fight of love

and the rock gets into second gear. so fasten your seatbelts america. this fuckers fixin to get floored.