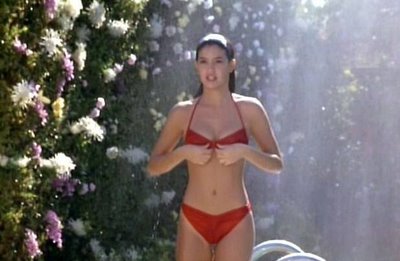 when i was in high school there were very few girls who i had the hots for who werent cheerleaders. one of those girls was named laura.

laura played tennis and had a sister who smoked pot and turned me on to led zeppelin and if i remember correctly went with me to the movies and we saw sixteen candles and kissed me afterwards and when my mom saw the look in my eyes after the date thought that i was on drugs.

as you know im 101 years old. so when i arranged for she and i to go out tonight i was terrified that she was 400 lbs. because of course after you have 2 kids and make it to 101 years old youre going to be – healthy.

because illinois is filled with special magic, laura looked almost exactly the same, which is alot like chickie from fast times at ridgemont high.

back in high school i had a terribly huge crush on laura but i knew she was out of my league so after she broke up with her bf right before prom i hooked her up with my buddy jack. they ended up getting married a few years later, when they were both 22. theyd been married the whole time. until recently.

so tonight we talked about life, high school, and what had happened in our lives since we last saw each other, some 87 years ago.

needless to say we shut down the fancy restaurant that we dined in, and the TGIF where we had tall Stellas, shots of Bailey’s, and a ice cream topped brownie.

we probably could have talked all night because very few people today knew who i was way back then. but laura did. and its so odd that the same girl who was all, dude heres led zep 1 and 2 is now an elementary school librarian. and just as hot.

but the best is that that spark from the night we saw sixteen candles was still there and everything that i liked about her then still remained. and then some.

and if i come back to chicago before she gets married again, i hope she will go to a cubs game with me, like she promised tonight. and then a lil game of stopwatch.

ps tomorrow at 11:30am i will be having lunch with my bro Bobby D at the Harry Caray’s by O’Hare. if i havent seen you yet and you wanna knock back a few Old Styles with me, come and look around. but i cant be there too long cuz i hafta catch a plane before the snow comes down. but come!