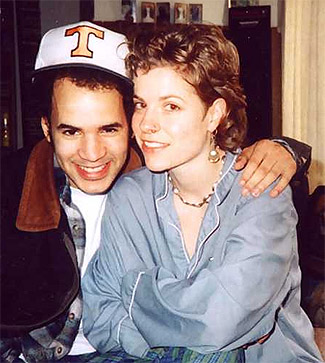 about her new film “At Your Cervix”

me:I hear you have a new film coming out about … vaginas?

amyjogoddard: Well, yeah, vaginas, pelvic exams, cervices. I seem to like to do work that has to do with our “organs.”

me: Nice. Well I saw the trailer of the film on your website. And I loved it. Even though it sorta creeped me out a little.

amyjogoddard: What creeped you out?

me: Well, as a man, I suppose anything having to do with steel instruments being shoved up the magical nether regions of the female anatomy makes me cringe.
Or do women feel the same way?

amyjogoddard: I think a lot of people feel that way. No film has ever been made exploring the way medical and nursing students learn to do pelvic exams and WHY women so often have such a horrible time with pelvic exams. They get seen as a necessary evil. We are making the film because they shouldn’t be that way.

me: It seems to me that there should be enough women doctors these days who would have called BS on the archaic methods of pelvic exams. Is that not the case?

amyjogoddard: No way! Many female AND male ob/gyns are really great. But I teach students how to do pelvic exams and I can say that gender doesn’t make a difference. I’ve had many male students who were really super wonderful, gentle and sensitive to the patient’s needs. I think that sometimes the women are actually at a disadvantage because they come in to a gynecological teaching session with baggage the males don’t have–either about their own bodies or sexuality or about their past experiences with exams. But we have had some strong support lately from incredible female ob/gyns as well as many midwives who really get what we are doing.

me: In the trailer there is a scene where a doctor talks about women who are given pelvic exams while under anesthesia – is that legal?

amyjogoddard: Yes, it is and it’s totally unethical. What happens is that women will go in to a teaching hospital, usually for a gynecological surgery, and when they check in they sign a huge stack of forms and there is some kind of disclaimer that says basically, “You agree that students may be involved in your care.” They usually do not spell out what that will mean and most patients don’t realize that they can say, “No, I don’t want a group of students filing into my room,” or that they can specifically say “I do not consent to educational pelvic exams.” So when they put the patient under anesthesia, the attending doctor will have one, two, three, or more students “practice” their pelvic exams on that patient. The idea is that “Well, she’s under, and she’s already getting one pelvic exam by her doctor. What’s a few more to an unconscious patient?”

me: Forgive my ignorance, but in real life are women usually conscious when they get a pelvic exam?

amyjogoddard: Yes, Tony. Although it’s common for a patient to “check out” because it’s such a vulnerable place for patients.

me: So how can the students know if theyre doing it right if the woman isnt awake enough to say ow ow ow?

amyjogoddard: Exactly! They can’t. It’s a very poor way for students to learn because in real life they will be dealing with real live patients and have to be able to communicate with a patient. One of the things the Gynecological Teaching Associates teach students is how to communicate and that they should check in with their patients to make sure they are not in any pain. Most people have no idea that pelvic exams when done correctly (with either a metal or plastic speculum) SHOULD BE COMFORTABLE! We want to dispel the myth that they are always painful in our film At Your Cervix. Many women look at me like I’ve got three heads when I say that though, because they’ve never ever had a comfortable exam in their lives. 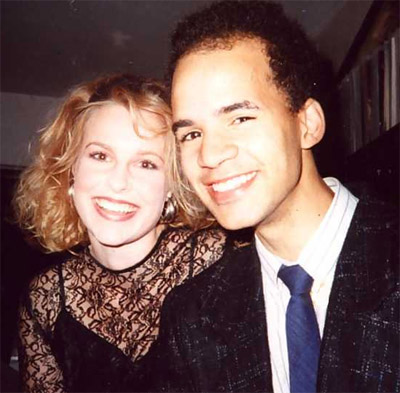 me: What percentage of women do you think have had a “comfortable” exam?

amyjogoddard: I really can’t say. I’ve had comfortable ones where my provider offered me a mirror to see what she was doing, and made it an experience where I could learn about and feel good about my body. I’ve also had exams that were painful, disrespectful and made me want to flee and never return. That’s what happens for a lot of patients, and that’s the big danger here–they get scared away after a bad experience and don’t come back for years, or ever!

me: Are you saying that women consider getting a pelvic exam the same way that men(and women) look in fear at going to the dentist?

amyjogoddard: Sort of. Women should be getting regular exams–it’s really important and the best prevention we have for cervical and other sexual/reproductive cancers, sexually transmitted infections and they are also an opportunity to talk about sexual issues. But it’s our genitals so it’s very very personal and scary for some people.

me: Now the craziest part of the trailer, for me, at least… is a very conscious woman getting an exam, while teaching the student. Did I see that correctly?

amyjogoddard: Yes, that’s how we teach. It’s like teaching someone to drive–you can’t teach it by talking about driving. You have to do it. We teach using our own bodies. We are all highly trained and are able to give the students immediate feedback which makes it a meaningful learning experience and the students usually show a real appreciation for how we contribute to their medical/nursing education.

me: Wait, “we”? So you have allowed students to practice on you?

amyjogoddard: Yes. I get more annual pelvic exams than you could imagine! I teach with about 20 other women here in New York. We teach in teams and I would say the GTAs (Gynecological Teaching Associates) are women who are comfortable with their own bodies and using our bodies as a teaching tool, we are committed to women’s health and to helping young providers learn how to show respect for women in the exam room. I don’t think they get enough of that in med school given the stories women tell me!

me: Can you give me some examples of how a doctor can “show respect for women in the exam room”?

amyjogoddard: A doctor can talk to her about what he/she will do BEFORE doing it. Patients want that but providers are always so rushed they often just run in and do the exam as quickly as possible and they’re half way out the door before a patient can even ask questions.

Providers should always try to meet their patient when she is fully clothed. She shouldn’t be in a gown on the table when they meet. That’s super disempowering. I’ve even heard stories of an assistant putting the woman up on the table with her feet in the footrests (often called “stirrups”) and then leave her there to wait for the doc. Yikes! Talk about vulnerable and disrespectful! It’s like she’s just genitals and not a real person. That’s really unacceptable.

me: Noted. OK so what’s next for the film? Is it pretty close to being completed?

amyjogoddard: We are almost done with production. We are shooting some of these gynecological stories of patients next Saturday Jan. 26 here in New York. If any of your NYC readers have stories they’d like to share on camera, they can contact me at aj@atyourcervixmovie.com. We’d love to hear them. Mainly we are in the difficult process of raising money for post-production. We hope to get into the editing room by the end of February but that depends on the money we are able to raise. We plan to start distributing the film in the fall of 08.

me: How much money do you guys need? Maybe there are a some doctors in the house who would like to contribute, etc?

amyjogoddard: We are trying to raise $100,000. Some folks are helping by planning fund raising events in various cities like Washington DC and Minneapolis. That’s super great! I hope there are some doctors in the house. I can say that our biggest contributions to date have been from caring ob/gyns!

me: Are there any ob/gyns who might be against your style of teaching?

amyjogoddard: Good question. I think there is still an “old guard” in medicine that doesn’t want to change and doesn’t think there is anything wrong with teaching using women under anesthesia without their consent, which by the way, is free! We are an expense. I think some MDs also want to keep control of teaching and don’t want to trust it in the hands of women who are not health care providers. But many many providers and educators really see the value of the way we teach and that we know our stuff.

me: Where can people donate if they wanna help this cause?

amyjogoddard: atyourcervixmovie.com –either via paypal or they can download this form to send it with your check to IFP , our fiscal sponsor. Then it’s tax-deductible!

me: Sounds awesome. Well thank you AJ, I hope you let us know how this film develops. Many of the readers at the busblog might not be women, but we might know some [smile]

amyjogoddard: Thanks so much for the interview Tony!