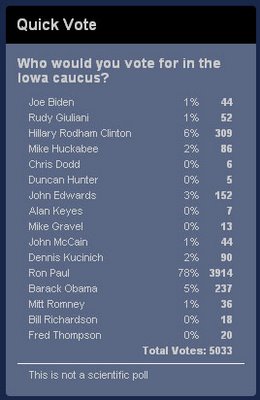 last night you may have seen Jay Leno return to network latenight talk show mediocrity. you might have also seen Dave Letterman rocking the beard.

Jay, though had an interesting guest, less than 24 hours before the all-important Iowa Caucus. He had born-again preacher Mike Huckabee on the show.

Not only did he give Huckabee a bunch of softball questions, but then invited him to do a blues jam with Kevin Eubanks and his band.

a band whose regular bass player was playing right along with the presidential candidate.

but for some reason CNN and King refused to air the Paul interview.

now when people say, “who cares about Ron Paul, he doesn’t do well in the polls,” maybe you should ask yourself, “how can a guy do well in public opinion polls if he gets cockblocked from getting on the air?” meanwhile when people actually do partake in the polls, if he does well, those polls are poo-pooed.

if Ron Paul can get a few thousand people to vote on the CNN poll, how come NO OTHER candidate can do the same? What is it about this man that his supporters are the only ones who know how to vote online? Or could it possibly be that he actually has real people behind him, thus all the millions that he’s raised. Or is that a hoax too?

to the left is the Larry King poll that you can partake in now, by clicking here. and below is the interview that CNN refuses to put on their air.