– how good people turn evil: from stanford to abu gharib 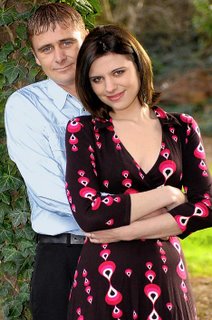 – speaking of Google, theyre getting into the web site development biz. it wont be free.

– also down under: masked gunman tries to rob bar, unfortunately a biker gang was holding a meeting in said bar, gunman ends up hog tied, humiliated

– why cops should be relieved that most people dont carry guns: eight days after the tragedy at Northern IL Univeristy, an undercover cop burst into college classroom to pretend that he was going to start killing students. claimed it was a “drill” claimed students, staff, teachers had been notified via email. not everyone got the email.

– shes 16, hes 36 (and divorced), she asked parents to let her move in with him, they say how about he move in with us. they were afraid of her getting mad at them. photo on the right.

– twelve steps for learning how to go with the flow

– Maxim got caught reviewing the new Black Crowes cd without listening to it. Maxim apologized last week. yesterday the Crowes lit up a joint and then refused Maxim’s apology.

– the one great idea that China had is being retooled.

– cats are democrats, dogs are republicans