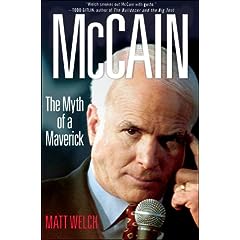 it’s my bro Matt Welch, author of the timely bio on the Senator, and who this morning wrote an excellent analysis of the alleged scandal.

In his piece, which I highly recommend if youd like to know the real deal, which is really more about journalism than sex or politics, Welchy concludes thusly:

There’s no doubt about it — selling yourself as a preternatural straight-talker while simultaneously participating in the hurly-burly of politics requires almost comical and constant hyperbole.

But what of the charges themselves? Those who really care about such things have known since at least 2000, and likely much earlier, that McCain does favors for campaign contributors, and has not always been the most faithful of husbands. I care not at all about the latter; while the former is one of many constant, low-level irritants people like me experience when reading yet another newspaper editorial about what a saint the guy is. The only thing new today is the name and details of a specific woman deemed by McCain’s 2000 campaign as particularly radioactive for whatever reason.

What about the newspapers? Clearly, there is an interesting story-behind-the-story, which The New Republic says it will detail tomorrow, for whatever that’s worth. I think the Post story kicks the Times’ behind, and was certainly worth printing. But their combined impact, I guess, will mostly be limited to people who haven’t heard stuff like this about McCain before. In the scheme of things, knowing that the 2000 campaign got the heebies about a galpal lobbyist is not the biggest issue in the world.

On Top of the Ticket, the LAT’s most popular blog, Andy Malcolm asks the tough question: is the story fair and/or credible.

And they call us a liberal rag?

Meanwhile the Internets are on fire with this story.